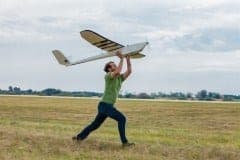 The USACE Mobile District has partnered with Woolpert to use the larger UAS because it is more stable and, accompanied with the metric camera system, allows for repeatable, calibrated performance which results in high-resolution data and more accurate imagery.

“Using an accurate, high-resolution metric camera system with a UAV, we can continue to explore the many applications and benefits of unmanned aerial technology,” said Clint Padgett, USACE Mobile District.

Despite the FAA’s recent announcement of its six UAS test sites, which did not include Ohio in its selection, the USACE Mobile District will continue to work with Woolpert to further develop operational concepts for upcoming 2014 UAS data collection efforts.

Through its partnership with Sinclair Community College, Woolpert was able to conduct the test flight using Sinclair’s Certificate of Authorization (COA) granted by the FAA. A COA is currently required in order for organizations to operate a UAV until the FAA opens the air space for commercial use of UAVs.
The recent test flight was a necessary step in USACE Mobile District’s plans to continue to lead growth of domestic UAS technology use for science applications and reliable, safe and efficient data creation.