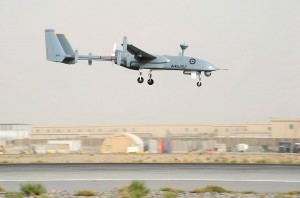 The Heron RPA has been operating in the Middle East Area of Operations since January 2010, providing ISR support to missions in Uruzgan province and southern Afghanistan.

With the end of Australia’s presence in Uruzgan approaching, the Heron detachment will shift focus to support coalition operations in Regional Command South during the final period of transition of security responsibility to Afghan National Security Forces and the Afghan elections scheduled for 5 April next year.

“The decision to extend the Heron RPA and its associated systems reflects Australia’s ongoing commitment to Afghanistan and the International Security Assistance Force (ISAF) through 2014. It is in line with the previously announced training and specialist contributions the ADF and the Australian Government will make in Afghanistan as our mission moves from Uruzgan to the wider Afghan nation,” Minister for Defence, Senator David Johnston said.

“Based at Kandahar Air Field, the Heron will provide ISAF’s Regional Command South with a highly capable system over the coming months and continue to enhance the ADF’s unmanned aerial system capability, which has grown significantly during the deployment to Afghanistan of ScanEagle, Shadow 200 and the Heron platforms.”

Chief of Air Force, Air Marshal Geoff Brown, AO, said that the Heron has provided Air Force with experience and knowledge essential for the use of unmanned platforms in Air Force’s future fleet.

“The Air Force has gained immense experience in the use of unmanned aerial systems during the campaign in Afghanistan. The extension of the Heron deployment until July 2014 will continue this important capability,” Air Marshal Brown said.

The Heron RPA is capable of medium altitude long endurance flights, using multiple sensors simultaneously to provide high resolution ISR capabilities. Heron RPA can conduct operations in excess of 24 hours, with a maximum speed of more than 100 knots (180 km/h) and at altitudes of up to 10,000 metres.