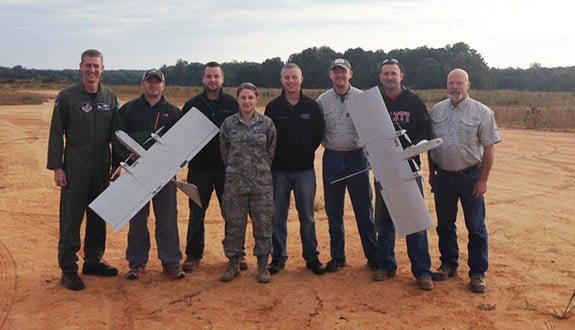 “This is a superb example of a team bringing to the table their unique expertise for a common cause. Air Force ROTC (AFROTC), UAV Pro, and LUSOA joined together to provide this opportunity to Liberty AFROTC cadets and students,” said John Marselus, LUSOA associate dean of Flight Operations.

Dragon Eye UAS certification is based on a Department of Defense training program used to fully certify Marines for the past decade.

The students completed all academic and simulator training on campus with LUSOA staff. They then split into two teams of six and took part in an Air Force ROTC-sponsored training and recruiting event held throughout the week at a military location. The flight training program was administered by Greg Lumpkin, president of UAV Pro. The company is a leader in unmanned vehicle training, support, technology, and facilities.

The students also had the opportunity to visit AAI Corporation near Fort Pickett, Va., where two Liberty graduates are preparing to deploy overseas. Trevor Britt (’12) and Sam Poff (’12) were recently certified to operate the Aerosonde UAS, which is currently being used in Afghanistan. Poff was singled out as a top performer in his class, according to AAI Senior Program Manager Dr. Joseph Cerreta.

Cerreta said AAI has been impressed by the caliber of LUSOA graduates and already has three fully trained Liberty alumni working overseas flying drones in support of ground troops.

“Our Liberty graduate employees have proven to be great students,” Cerreta said. “They demonstrated very good ethical qualities and a desire to succeed. I have received only positive comments about all of them from our deployed leaders.”
Josh Tate (’11) has assumed the role of Flight Operations Manager at AAI’s largest deployment site for Aerosondes. Mike Kennedy (’11) and Jordan Nicholson (’11) are also deployed with AAI.

Marselus said the School of Aeronautics developed its UAS concentration to specifically meet industry needs. Because of this, graduates are garnering coveted positions and immediately adding value to employers.

“Our students are graduating with a competitive edge,” Marselus said. “It is a blessing to see them succeed in their careers and we give the Lord the credit for the work He is doing through them and our program. We hope that in whatever capacity our graduates work, that they would use their abilities to glorify God and fulfill His mission.”

In June, Marselus joined a team of industry professionals in a presentation on the use of drones in law enforcement during the National Sheriffs’ Association Annual Conference in Charlotte, N.C.

The Liberty University School of Aeronautics has grown from four students to more than 700 in the last 10 years and is currently the largest faith-based university aviation program in the country. The school offers a variety of online and residential programs, including a bachelor’s degree with concentrations in military aviation, missionary aviation, commercial/corporate aviation, and Unmanned Aircraft Systems (UAS), as well as flight attendant training and aircraft mechanic certifications.