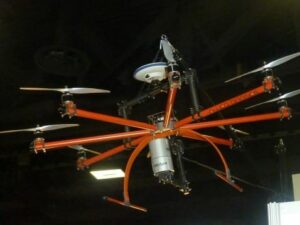 Velodyne, a leading supplier of 3D LiDAR sensors, used on terrestrial, maritime and airborne platforms for autonomous navigation and mobile mapping, is generating interest this week at the Unmanned Vehicle show in Washington DC.

Velodyne has UAV/Drone enthusiasts in awe with their exhibit that integrates the HDL-32E sensor with the Phoenix Aerial Systems Octocopter, transmitting live 3D LiDAR data from the exhibition floor onto a large size LCD monitor. 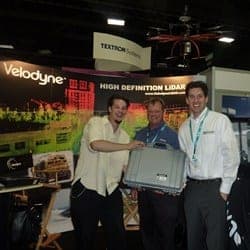 Andy Trench, founder of XYZservices.com, was so impressed to see the capabilities of the HDL-32E combined with an UAV, that he bought one of the sensors on the show floor.

The team at XYZservices.com, which delivers photogrammetry mapping, high-resolution point-cloud data, and film quality visuals for a multitude of applications, is thrilled to be working with Velodyne to advance the boundaries of 3D data collection using LIDAR technology.