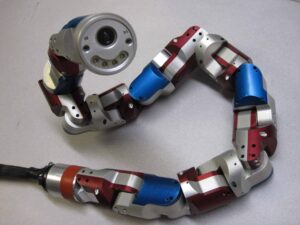 Tests of a modular snake robot in an Austrian nuclear power plant proved the multi-jointed robot with a camera on its head can crawl through a variety of steam pipes and connecting vessels, suggesting it could be a valuable inspection tool, report researchers at Carnegie Mellon University’s Robotics Institute.

The snake robot was able to maneuver through multiple bends, slip through open valves and negotiate vessels with multiple openings. With a video camera and LED light on its head, the snake was able to peer into holes and get multiple views of items inside the pipes.

Though the robot’s body twists, turns and rotates as it moves through or over pipes, the view from the video feed was corrected so that it was always aligned with gravity. This new “right-side-up” video feature made controlling the robot more intuitive and helped engineers better understand what the robot was seeing, said Robotics Professor Howie Choset.

“Our robot can go places people can’t, particularly in areas of power plants that are radioactively contaminated,” Choset said. “It can go up and around multiple bends, something you can’t do with a conventional borescope, a flexible tube that can only be pushed through a pipe like a wet noodle.”

Members of the CMU Biorobotics Lab, working with representatives of the plant owner, EVN Group, sent their snake robot into a variety of pipes at the Zwentendorf Nuclear Power Plant in May. The boiling-water reactor was built in the 1970s, but was never operated. Its lack of radioactive contamination makes it suitable for research, testing and educational purposes.

A nuclear power plant contains miles of pipes to carry water and various stages of steam and, despite the potential for corrosion and other damage, much of that piping is difficult to inspect because radioactivity limits access by people.

“Though the deployment at the Zwentendorf plant was limited, we saw the snake robot reach areas of pipes that would be difficult or impossible to access using a borescope,” said Martin Fries, an engineer for EVN Group who assisted with the tests. “With further development and testing, such a robot could give operators a more complete understanding of a plant’s condition and perhaps reduce a plant’s downtime by enabling faster, more efficient inspections.”

Kevin Lipkin, senior systems engineer at the Robotics Institute, said the longest deployment in a pipe during the Zwentendorf testing was 60 feet. “We could have gone farther, but we need to figure out how to best manage longer deployments,” he said. “We were just being cautious because it was our first time in this plant.”

Video images obtained at Zwentendorf proved to be clear, generally well-lit and in focus, Lipkin noted.

The modular snake robot is two inches in diameter and 37 inches long and tethered to a control and power cable. Its body consists of 16 modules, each with two half-joints that connect with corresponding half-joints on adjoining modules. The robot body has 16 degrees of freedom, enabling it to assume a number of configurations and to move using a variety of gaits – some similar to a snake’s, but others that take advantage of the robot’s unique mechanical characteristics.

The snake robot has been tested in urban search-and-rescue environments in which it crawls through the rubble of collapsed buildings, in archeological excavations and in conventional fossil fuel plants. Further development of the robot could enhance its inspection capabilities, including a next-generation robot that will be waterproof. The researchers also envision designing a “tether runner” device that could move along the robot’s tether and position itself around bends in a pipe, ensuring that the robot can be retrieved.

Choset said the video imagery possible with the snake robot is superior to what is available through a borescope, which has limited ability to change its camera angle. Further development could enable the snake robot to perform simultaneous localization and mapping (SLAM), a robotic technique that would produce a map of a nuclear plant’s pipe network as it exists.