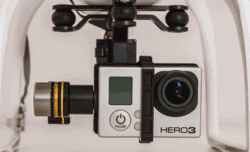 DJI has announced the general availability of the Zenmuse H3-2D, a gyro-stabilized gimbal built specifically for the GoPro HERO3. Designed to work with DJI’s popular PHANTOM consumer quadcopter, the Zenmuse H3-2D is fully integrated and eliminates the risks of installing third party accessories on a PHANTOM, i.e. NAZA and/or MC board burn out. The Zenmuse H3-2D is now available from DJI’s large dealer base for $699.

The Zenmuse H3-2D was designed for both average consumers and prosumers seeking a cost-effective means of producing a very wide range of high-quality aerial cinematography. With the Zenmuse H3-2D’s advanced algorithms and instant-response direct drive motors, the GoPro remains perfectly level and steady during nearly all conditions – either while held in hand or in the air. This combination allows consumers to produce high quality HD video that rivals productions from systems costing nearly ten times more. Unlike other, less stable, similarly sized gimbals, the DJI Zenmuse H3-2D utilizes uses a standalone PMU (Power Management Unit) to maintain proper voltage to the additional servos on the gimbal – effectively eliminating chances of overload on the PHANTOM’s internal components.

“This amazing gimbal marks the first time the average person will have the same power to make films as the elite in Hollywood. We simply want to make things easier for creative people to put on video what they see in their imagination – and we are doing just that,” stated Colin Guinn, chief innovation officer of DJI. “We’re very excited to see what our customers create over the next several months. DJI is completely changing the landscape in both professional and consumer film making – from backyard video to professional TV and movie productions.”