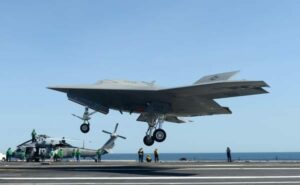 For UCAS-D, this represents the most significant technology maturation of the program. Ship relative navigation and precision touchdown of the X-47B are critical technology elements for all future Unmanned Carrier Aviation (UCA) aircraft.

Don Blottenberger, UCAS-D deputy program manager, commented, “This landing, rubber hitting deck, is extremely fulfilling for the team and is the culmination of years of relative navigation development. Now, we are set to demonstrate the final pieces of the demonstration.”

Earlier in the week, the UCAS-D test team and CVN 77 worked together to successfully complete the first ever launch of an unmanned aircraft from an aircraft carrier proving the importance of introducing unmanned aviation into the already powerful arsenal of aircraft squadrons.

“We are proud to be a part of another historic first for Naval Aviation. The landing was spot-on and it’s impressive to witness the evolution of the Carrier Air Wing,” said Capt. Brian E. Luther, commanding officer, USS George H.W. Bush.

The various launch and landing operations of the X-47B on the flight deck of George H.W. Bush signify historic events for naval aviation history. These demonstrations display the Navy’s readiness to move forward with unmanned carrier aviation operations. 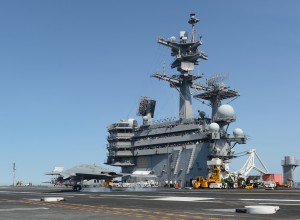 Capt. Jaime Engdahl, program manager for Unmanned Combat Air Systems program office, said, “When we operate in a very dynamic and harsh carrier environment, we need networks and communication links that have high integrity and reliability to ensure mission success and provide precise navigation and placement of an unmanned vehicle.”

“Today, we have demonstrated this with the X-47B, and we will continue to demonstrate, consistent, reliable, repeatable touch-down locations on a moving carrier flight deck,” he continued. “This precision relative navigation technology is key to ensuring future unmanned systems can operate off our aircraft carriers.”

The UCAS-D program plans to conduct shore-based arrested landings of the X-47B at Naval Air Station Patuxent River, Md., in the coming months before final carrier-based arrestments later in 2013.