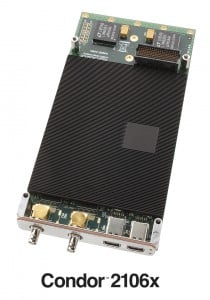 Designed for use in military/avionics embedded applications such as for 360° airborne reconnaissance, unmanned aerial vehicles (UAVs) or unmanned aircraft systems, the Condor 2106x features two high definition serial digital interface (HD-SDI) inputs which reduce cabling/weight for airborne applications. Further, the HD-SDI inputs are in the form of raw uncompressed frames so no video quality is lost due to compression and very low latency is achieved. Decoding, scaling, stitching and format conversions can be processed in the GPU with minimal CPU impact and an API is provided for customer integration.

The Condor 2106x is designed for seamless integration with most single board computers (SBCs) on the market and supports two outputs at a time from the front panel. It has two mini DisplayPort connectors so that customers can get either DVI or VGA off the front panel rather than needing two separate boards or using non-standard connectors. The card also supports two RGB (STANAG 3350B, RS-343), one VGA or one TV (NTSC/PAL/RS-170) output. The mini DisplayPort adapter is retained by a custom bracket so that it does not become unplugged through vibrations and shock.

The mezzanine card also supports various other video input formats including two HDMI/DVI or one 3G-SDI. It is also optionally available as a capture card only – without the GPU/video outputs and the power consumption can be reduced to a maximum of 10W.

The Condor 2106x is available in various ruggedized levels and has conduction or convection cooled variants. While Windows or Linux drivers are available by default, other real time operating systems (RTOS) such as VxWorks, Integrity and LynxOS will be supported on both x86 and PowerPC platforms, upon customer requests.