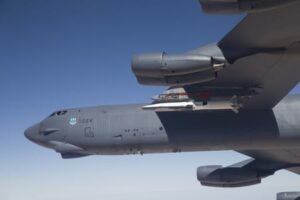 A Boeing X-51A WaveRider unmanned hypersonic vehicle achieved the longest air-breathing, scramjet-powered hypersonic flight in history May 1, flying for three and a half minutes on scramjet power at a top speed of Mach 5.1. The vehicle flew for a total time of more than six minutes.

“This demonstration of a practical hypersonic scramjet engine is a historic achievement that has been years in the making,” said Darryl Davis, president, Boeing Phantom Works. “This test proves the technology has matured to the point that it opens the door to practical applications, such as advanced defense systems and more cost-effective access to space.”

A U.S. Air Force B-52H Stratofortress from Edwards Air Force Base released the X-51A from 50,000 feet above the Point Mugu Naval Air Warfare Center Sea Range at 10:55 a.m. Pacific time. After the B-52 released the X-51A, a solid rocket booster accelerated the vehicle to about Mach 4.8 before the booster and a connecting interstage were jettisoned. The vehicle reached Mach 5.1 powered by its supersonic combustion scramjet engine, which burned all its JP-7 jet fuel. The X-51A made a controlled dive into the Pacific Ocean at the conclusion of its mission. The test fulfilled all mission objectives.

The flight was the fourth X-51A test flight completed for the U.S. Air Force Research Laboratory. It exceeded the previous record set by the program in 2010.