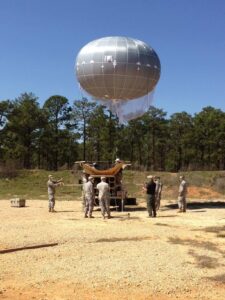 World Surveillance Group Inc., a developer of lighter-than-air aerostats and unmanned aerial systems (“UAS”), today announced that, with the support of wholly owned subsidiary Lighter Than Air Systems Corp. (“LTAS”), the operational team has delivered the initial Blimp in a Box™ (“BiB”) aerostat system to the Department of Defense (“DoD”). The delivery included not only demonstration and testing of the aerostat system but also multiple training sessions for soldiers on the base in preparation for future military exercises.

Formal DoD acceptance of the first BiB system was issued following completion of the testing, the initial round of training and an inventory accounting.

WSGI’s and LTAS’ operations occurred in cooperation with WSGI’s wholly owned subsidiary Global Telesat Corp. who was awarded the contract from the DoD for a set of BiB systems in January 2013. The contract award includes on-location support for technical fact gathering, installation and training for the BiB systems. In coordination with the DoD, delivery, installation and on-site training for the second BiB system will commence in April 2013 and will include improvements, spares and modifications following several Army requested modifications of the system.

WSGI President and CEO, Glenn D. Estrella, stated, “We are excited about the delivery and acceptance of the first Blimp in a Box aerostat system by the Army pursuant to our contract. The demonstration, testing and operation with the Army of the first delivered BiB provided us with valuable knowledge in terms of ways to continue to improve our BiB tactical aerostat system. With our recently completed acquisition of LTAS, we are now able to swiftly utilize our combined resources to implement the Army’s requested modifications before the delivery of the second BiB system to our customer.”office in Patuxent River.