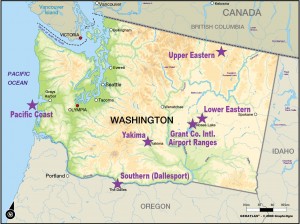 A consortium of Washington-based organizations will soon submit the final section of a proposal to site an unmanned aircraft system research and testing facility in central Washington. If successful, the proposal to the Federal Aviation Administration will result in the FAA naming the Pacific Northwest Unmanned Aerial Systems Flight Center as one of six U.S. testing facilities later this year.

Innovate Washington, the lead agency of the state of Washington focused on fostering growth of the state’s innovation sectors, and the U.S. Department of Energy’s Pacific Northwest National Laboratory in Richland, are working with ten other state, county and private industry partners to be selected as one of six locations nationwide to conduct critical research that will safely accelerate the integration of civil unmanned aircraft systems into the national airspace system.

The proposal identifies Grant County International Airport in Moses Lake, Wash., as the location of the flight center’s principal office and facilities. In addition, the proposal identifies several locations in central and western Washington where a broad range of testing may occur. For example, the proposal provides a testing range over the Pacific Ocean near Grays Harbor for those developers needing “blue water” testing capability. To evaluate the next generation of aircraft traffic control systems, a testing area that simulates an active airport environment – similar to activity experienced daily at a metro airport— is also included. A map of the testing facilities is below.

Consortium members possess technical research and development capabilities in areas such as advanced navigation, collision avoidance, and alternative fuel system development. Through research and test flights in its test ranges, located over remote and sparsely populated areas in Washington, the consortium says it can advance the application of unmanned aircraft use in search and rescue, weather data acquisition, agriculture crop management, avalanche control and snow pack analysis.

“Siting a new flight center in central Washington will allow the state to build off of the established strengths of its thriving aerospace industry,” said Bart Phillips, vice president for economic development for Innovate Washington. “The Flight Center supports the commercial growth of the UAS sector, attracting and additional aerospace research and development dollars, providing users with cost-effective, safe, flight testing facilities and fostering the development of more companies and high quality jobs in Washington.”

The FAA Modernization and Reform Act of 2012 enacted by Congress calls for establishing six unmanned aircraft system research and testing sites in the U.S. The final proposal submittals are due to the FAA by May 6, with decisions on siting the flight centers scheduled to be made before December 31, 2013.