Armed Drones Operated from RAF base in UK, says MoD 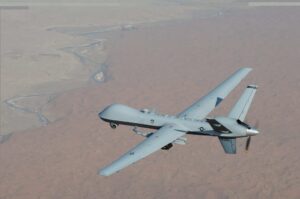 The Ministry of Defence has confirmed that armed drone aircraft have been operated remotely from Britain for the first time, according to a BBC report.

It said Reaper drones had flown missions controlled from RAF Waddington, Lincolnshire, where campaign groups are holding a protest rally against the practice.

The MoD said it respected people’s rights to protest peacefully.

The drones are mainly used for surveillance, but could use weapons if commanded to by their pilots in the UK.

Campaigners say the switching of control of flights to the UK marks a “critical expansion in the nation’s drones programme”.

They are calling on the government to abandon the use of drones, claiming they make it easier for politicians to launch military interventions, and have increased civilian casualties.

The MoD has defended their use in Afghanistan, saying it has saved the lives of countless military personnel and civilians.

The 10 Reaper aircraft are all based in Afghanistan to support UK and coalition forces and can carry 500lb bombs and Hellfire missiles for strikes on insurgents.

They are piloted remotely, but launched and landed with human help at Kandahar airbase.

Read the full article at: http://www.bbc.co.uk/news/uk-england-lincolnshire-22320275