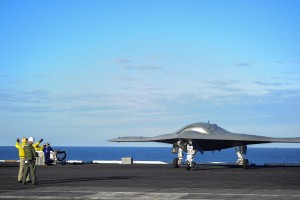 The exercises demonstrated the ability to maneuver the tailless, strike-fighter-sized aircraft quickly and precisely on the flight deck using a wireless handheld controller. The tests are the latest in a series of activities leading up to the first carrier landings of the X-47B, which are planned for mid-2013.

“TTNT is part of the overall command and control architecture for the X-47B, and it plays an essential role in helping the aircraft perform vital functions,” said Bob Haag, vice president and general manager of Communication and Navigation Products for Rockwell Collins. “We’re pleased that our technology is helping Northrop Grumman and the Navy successfully prepare for the introduction of unmanned aircraft to carrier operations.”

It has been used in demonstrations on more than a dozen airborne platforms, including the F-16, F-22, F-15, F/A-18, B-2, B-52, Airborne Warning and Control System, Battlefield Airborne Communications Node and E-2C Hawkeye.

Watch a demonstration of the TNTT system: