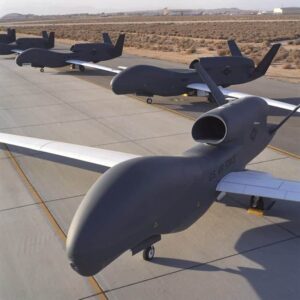 “Even with a year marked with fiscal challenges and heightened operations tempo, the Global Hawk government-industry team was able to increase aircraft mission capability by 26 percent in fiscal year 2012. This increase allowed the Global Hawk team to execute and fly more than 13,400 hours last year,” said George Guerra, vice president of the Global Hawk program for Northrop Grumman’s Aerospace Systems sector. “This prestigious award signifies that the entire team is constantly striving to improve in every area and doing everything we can to support U.S. and allied troops.”

Echoing the program’s marked performance improvements is the recently released director, Operational Test and Evaluation annual report to the Secretary of Defense. The extensive report highlights the Global Hawk’s mission-capable rate, which rose from approximately 52 percent in fiscal year 2011 to nearly 78 percent in 2012, while exceeding the Air Force’s goal for 19 consecutive months.

“Congratulations to Northrop Grumman for ensuring our warfighters are equipped with a system that is ready and available when they need it,” said Col. Carlin Heimann, Global Hawk system program director for the U.S. Air Force. “It is encouraging to be recognized at Air Force levels for the contributions this team makes to improving Global Hawk reliability and sustainability. This will always be a joint government-contractor effort and together we earned this award, which is a reminder that we have our priorities right.”

In 2004, the Air Force chief of staff approved the award, named for the 20th secretary of the Air Force, to promote maintenance excellence. Air Force officials determine the award recipients by calculating the improvements for a predetermined set of metrics and multiplying each metric by a corresponding weighted value. The award will be presented at a date and location to be determined.

Capable of flying for more than 30 hours at an altitude over 60,000 feet, Global Hawk provides decision-makers with near-real-time intelligence, surveillance and reconnaissance, and provides warfighters with unmatched communications relay capabilities. It continues to fly missions around the world, accumulating more than 88,000 total flight hours, 80 percent of which were flown in combat in support of overseas contingency operations. A total of 37 Global Hawks have been delivered to the Air Force, with additional aircraft scheduled for delivery this year.