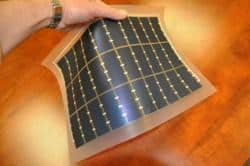 The sheet has a conversion efficiency of 29%, generates up to 9.25 watts in a 320 square centimeter active area, and weighs 230 grams per square meter. The sheet is highly flexible and can be wrapped around a cylinder a few inches in diameter without damage.

The solar sheet is enabled by MicroLink’s proprietary epitaxial lift-off (ELO) technology, in which a triple-junction solar cell is removed from the semiconductor wafer on which it is grown. The solar cell is mounted on a metal sheet, which provides mechanical support to the thin, brittle solar cell material. The efficiency of the 20-cm2 solar cell, which resembles a sheet of thin metal foil, is up to 32.2%. The ELO process permits the solar cell to be removed from the semiconductor wafer without damaging the wafer, which can be reused multiple times. This enables a substantial reduction in the cost of the ELO solar cell compared with conventional triple-junction solar cells.

Dr. Noren Pan, the President and CEO of MicroLink Devices, said, “We are extremely proud to have developed this high-performance solar sheet. We know of no other device that offers a comparable performance in terms of efficiency and weight.”