New Management at Imint to Support Next Growth Phase 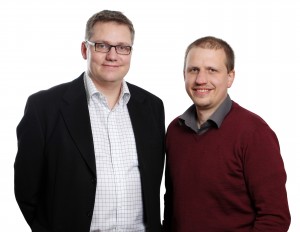 Andreas Lifvendahl has joined Swedish software firm Imint as their new CEO. Previous CEO, and company founder, Harald Klomp, will take on a more strategic role as advisor to the board. Andreas Lifvendahl has also appointed Simon Mika, previously sr. project manager, to new CTO. These changes reflect the need to shift gear as the company grows, and initiates development of new markets.

During the last two years, Imint has been selected by several of the leaders in the field of Unmanned Aircraft System (UAS) surveillance, and the Vidhance technology has successfully been integrated into several OEM partner products. The Imint Vidhance technology has also successfully been implemented in other domains, such as enhancing underwater video. With a field proven and mature technology, Imint is now aiming at expanding business and develop new markets.

“I am very excited to welcome Andreas Lifvendahl as our new CEO as we aim at further solidify Imint as a leader in its domain, and utilize this momentum to take Imint to new arenas.” says Imint founder Harald Klomp.

”Targeting the aerial surveillance market in the defense industry as first market was very challenging”, said Andreas Lifvendahl, CEO of Imint, and continued: ”But we stood the test, and from this position we are very well suited to take the technology elsewhere, where enhanced vision in real time is critical, especially in resource constrained viewing platforms. We have already good initial traction in new markets, and will continue to develop these opportunities, which also will include new partnerships and business models. We have confirmed that we could bring value to diverse markets such as offshore underwater inspection, naval rescue systems, security systems and control rooms, heavy machinery operation and live broadcasting, to name a few.”

Andreas Lifvendahl re-joins Imint, after serving as Imint Sales & Marketing Director in 2010-2011, leaving to head a branch office of technology consultant firm Etteplan (Publ). Lifvendahl has extensive experience in global account management and sales management, primarily in the software and semiconductor industry. Lifvendahl was Director of Worldwide Sales and Marketing at Swedish software firm IAR Systems Group (Publ.) between 2007 and 2010. Lifvendahl has a MSc EE degree from Uppsala University, and additional education in commercial law (Uppsala University) and business administration (Stockholm School of Economics). Simon Mika, new CTO, has a MSc IT degree from Uppsala University, and experience as software development consultant. Simon joined Imint in 2008, and has since 2010 been senior project manager, and heading software integration projects.

Öjvind Norberg, chairman of the board of directors at Imint, concluded: ”Imint is ready for its next development phase. I am confident that the new management team will meet the new challenges with dedication, and I would like to thank Harald Klomp for his true entrepreneurship and for bringing Imint to where it is today.”