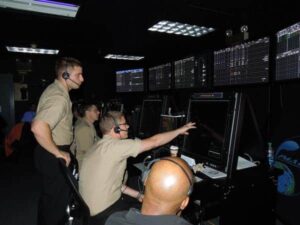 Navy representatives recently participated in tests for the Unmanned Combat Air System Demonstration (UCAS-D) that will drive recommendations for digital messaging implementation and unmanned aircraft integration into the carrier environment.

“It was very exciting to see fleet CATCC controllers successfully demonstrate the technology our team has been developing for years,” said Capt. Jaime Engdahl, UCAS-D program manager, who observed USS Vinson controllers during tests in early October. “There was such a high level of energy in the room during their test periods. You really felt like you were observing a CATCC team actually conducting operations at sea.”

“Due to the extremely limited availability of aircraft carriers for installation and testing of new aviation systems, shore-based emulation of shipboard systems and procedures is paramount to ensure cost-effective and timely integration,” Engdahl said. “We support the fleet users. That’s why having them come down and test this technology early is so important.”

During recent tests using the program’s CATCC simulator, the NASIF team challenged controllers to conduct operations in a future digitized environment, far advanced from what they are used to in the fleet today. Presently, they control multiple aircraft using radar displays and issue flight instructions to pilots using voice radio communications. Inside the NASIF, they had the ability to send and receive digital instructions to aircraft, in addition to using voice instructions.

“After the learning curve the first day, we realized it was not too much for our controllers to handle,” said Lt. John Woods, CVN 72 CATCC Officer. “We do see that there is a clear advantage to using this technology in the future.”

Each nine-person air traffic control team completed approximately 20 simulated test scenarios. Controller workload was captured during these scenarios by testing a combination of digital and voice messaging test conditions with a mixture of manned and unmanned aircraft. During early scenarios, the controllers relayed verbal commands to a UAV mission operator elsewhere on the “ship” who entered digital commands to control the vehicle. Later in the week they graduated to testing advanced scenarios, using integrated digital messaging capability and higher levels of system automation.

“A major objective for our program is to demonstrate a completely digital carrier control environment where any aircraft could utilize this technology in the future, but we need to introduce that technology incrementally to allow controllers to embrace change,” Kjose said. “As we bring the X-47B demonstrators to the carrier for sea trials, controllers will continue to use voice control for manned aircraft operations, but in the not too distant future, users will become more proficient with digital technology and will look for the ability to fully integrate air wing operations with manned and unmanned aircraft.”

The tests demonstrated the controllers’ effectiveness to manage operations in the carrier control area. Engineers measured the time it took operators to send and transmit messages, calculated from button actions, message times and voice recordings. They also looked at the impact on the controllers’ visual senses by using a tracking camera to record eye movement. Overloading visual senses can lead to reduced performance, which is why human factors engineers seek to organize the on-screen displays and controls in the most efficient manner possible.

“We wanted to find out if the system was easy to use; did the display promote effective mission task completion; and if users felt comfortable with autonomous operations,” said John Winters, a human factors engineer who helped design the software.

The concept provides functionality improvements with a goal of decreasing controller work load, which will help improve safety, Kjose said. For example, controllers will not need to ask pilots for fuel state updates every 10 minutes like they do today. Instead, updates will be automatically populated and displayed on the carrier’s Integrated Ships Information System (ISIS).

Another improvement is controllers can send digital messages to specific aircraft at any time during flight. Aircraft routinely land aboard carriers at 60 second intervals and controllers are restricted from speaking on the radios during the last 20 seconds prior to landing. For controllers, it’s a huge advantage to communicate directly with other aircraft while one is on final approach, he added.

The extensive modeling and simulation of launch and recovery operations conducted in the NASIF by fleet users allowed the UCAS-D team to evaluate integration of manned and unmanned aircraft flight operations and the effects on human operators utilizing new digital messaging technology.

“The information the CVN 70 and CVN 72 teams gave this program is going to help revolutionize carrier operations, Kjose said. “We are laying the groundwork for future carrier-based operations.”