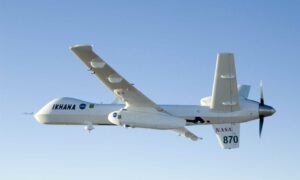 NASA’s Dryden Flight Research Center and General Atomics Aeronautical Systems, Inc. (GA-ASI) have partnered in a collaborative agreement to allow for the development and flight testing of new command and control satellite link capabilities on a Predator B unmanned aircraft system.

As the result of a no-cost Space Act Agreement signed in September, the parties will upgrade the command and control system of NASA’s MQ-9 Predator B, named “Ikhana,” to enable aircraft operations in more remote geographical regions. The upgraded aircraft will then be used to conduct systems testing and evaluation flights. This activity will allow both NASA and GA-ASI to reach the mutual goal of demonstrating this advanced capability.

“The system improvements enabled by this agreement expand the utility of the Ikhana MQ-9 for NASA science and the development of technology required for unmanned air systems to fly in the national airspace,” said NASA Dryden center director David McBride. “Both are key national priorities that benefit from this government/industry cooperative effort.”

“We are pleased to renew our commitment to NASA and to help expand the utility of Ikhana to Arctic missions,” said Frank Pace, president of the Aircraft Systems Group, GA-ASI. “With growing interest in using remotely piloted aircraft for civil missions, we expect our work with NASA to open the door for increased confidence in operating these aircraft in the National Airspace System.”

“This new capability will allow Ikhana to support NASA science missions at higher latitudes where many important geophysical processes must be studied,” said Bob Curry, NASA Dryden chief scientist. “In recent years, unmanned aircraft have demonstrated transformational opportunities for Earth science airborne research, particularly due to their very long endurance capability. They can also reduce the need to expose aircrew to remote and unforgiving environments.”

NASA is using the aircraft in advanced flight research activities including those paving the way for opening up the National Airspace System to unmanned aircraft systems operation, in addition to its role in advancing science.

The next mission for NASA’s Predator B aircraft, planned for the summer of 2013, is the Marginal Ice Zone Observations and Processes Experiment, or MIZOPEX. NASA will provide the aircraft system and its associated engineering, technical and operational staff to support Ikhana’s mission to carry science instruments designed to investigate ice changes in the Arctic. The MIZOPEX team is comprised of scientists led by James Maslanik of the University of Colorado at Boulder. The science project manager is John Adler of the National Oceanic and Atmospheric Administration.

Ikhana was manufactured by GA-ASI and delivered to NASA in 2006. Ikhana carried the NASA-developed Autonomous Modular Scanner for the multi-year Western States Fire Mission in 2007 and 2008 that investigated fires in the Western United States, especially California. Working closely with the Federal Aviation Administration, the remotely piloted aircraft flew in the National Airspace System allowing the sensor to deliver near-real time wildfire information to incident commanders in the field.

Ikhana is capable of reaching altitudes above 40,000 feet and flying for more than 20 hours.