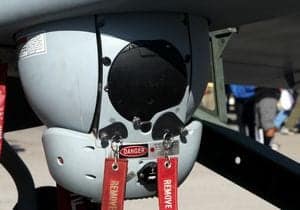 Marine Air Control Squadron 1 showcased field equipment such as the Navigation Integration and Coordination System. The NAVICS is a mobile Air Traffic Control unit that provides support for departing, en route and landing aircraft in any weather.

Air Traffic Control uses some of the featured equipment to provide safe landing conditions for pilots.

The static display allowed air-show visitors to get an up close look at all featured equipment, including a mobile ATC tower called a Remote Landing Sense Tower. 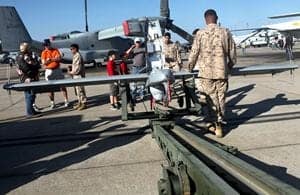 “The Remote Landing Sense Tower is a small, expeditionary radio communication tower.” said Capt. James Terheyden, the detachment commander with MACS 1 and a San Francisco native. “It can be put on a Humvee and taken to remote landing strips or dirt landing strips.

The display also featured the RQ-7B Shadow unmanned aerial vehicle. The Shadow is equipped with a video to provide commanders with real-time reconnaissance views.

“It can’t carry ordnance yet but it is equipped with a laser designator,” said Sgt. Marcus Vancleave a unmanned aerial vehicle operator with Marine Unmanned Aerial Vehicle Squadron 3 and a Dresden, Tenn., native. “The laser can point to a location and guide ordnance from other aircraft to hit in that spot.”

The display gave air show spectators the opportunity to see equipment used in field environments. They get to explain what they do to people who are truly interested, explained Vancleave.

“I am excited to show people how we can aid planes at the air show.” said Terheyden. “They don’t usually see the ‘linemen’ of the wing.”

The static display allowed air show attendees to leave with a greater understanding of what MACG-38 Marines do on a daily basis.