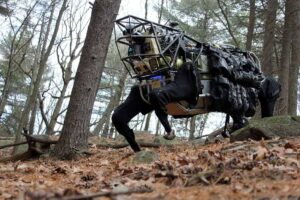 Boston Dynamics has released a video showing the LS3 ‘Legged Squad Support System’ during a recent capabilities demonstration. LS3 is a dynamic robot designed to go anywhere Soldiers and Marines go on foot. Each LS3 will carry up to 400 lbs of gear and enough fuel for missions covering 20 miles and lasting 24 hours.

The development of LS3 is being funded by DARPA and the US Marine Corps with the first walk out scheduled to take place during 2012.