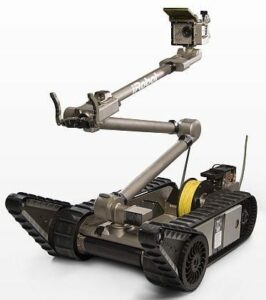 Unmanned ground vehicle (UGV) designers at iRobot Corp. in Bedford, Mass., will enhance their design of an inflatable robotic arm for military applications in rough and difficult conditions.

A justification and approval announcement was posted on 8 Aug. to award the contract to iRobot under other than full and open competition because no equally qualified robotics expert can be found for the project.

The overall DARPA M3 program seeks to improve scientific understanding of how robots move over the ground and manipulate objects in natural surroundings, and improve robot manufacturing, design tools, and control algorithms.

Although military robots hold great promise for improving human effectiveness in defense operations, as well as saving lives in explosive ordinance disposal (EOD) missions, the mobility and manipulation capability of today’s robots is poor, compared to humans and animals, DARPA officials point out.

If these limitations were overcome, however, robots such as unmanned ground vehicles (UGVs) could help fighting forces far more effectively than they can today across a wide range of missions, officials say.

The DARPA M3 program aims at discovering and developing fundamentally new understanding and approaches in robotics that will be applicable to many applications and environments. Technologies developed in this program also might benefit manned vehicles in capabilities such as terrain classification, stability control, and subsidence warning.