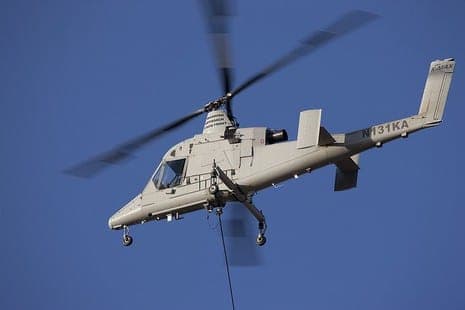 For the second time this year, the U.S. Marine Corps has approved the deployment extension of K-MAX Cargo UAS, the first unmanned helicopter to deliver cargo and resupply troops in a combat zone.

By supplying forward operating bases with K-MAX instead of ground convoy or manned aircraft, the Marine Corps has reduced the threat posed to personnel by improvised explosive devices by thousands of hours.

Earlier this year, the Marine Corps requested the aircraft, a joint effort by Lockheed Martin and Kaman Aerospace, stay in theater through September 30, the end of this fiscal year. Today’s announcement extends K-MAX service in Afghanistan for an additional six months and includes an option to extend its time through September 2013.

“K-MAX has proven its value as a reliable cargo resupply aircraft and an asset that saves lives,” said Vice Adm. David Architzel, commander of Naval Air Systems Command, which manages the K-MAX program for the Marine Corps. “The use of this aircraft eliminates the need for manned ground convoys, reducing the number of our warfighters exposed to improvised explosive devices.”

The K-MAX program, developed to satisfy a Joint Urgent Operational Need Statement generated by the Marine Corps in 2010, has flown 485 sorties, 525 hours and lifted more than 1.6 million pounds of cargo since it arrived in theater in November 2011. In May, the aircraft performed a historic “hot hook-up,” enabling personnel to attach cargo to the unmanned aircraft while in hover mode. That capability is now used regularly to perform retrograde missions (when cargo is carried on the return flight as well), increasing the efficiency of the K-MAX.