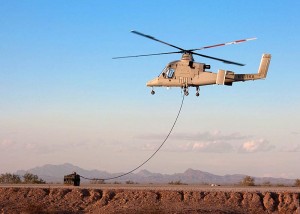 An unmanned K-MAX flies in Yuma, Ariz. A small beacon can improve cargo-delivery accuracy to within three meters.

Lockheed Martin has developed a small honing beacon to help increase the accuracy of cargo drops by UAVs. The beacon is small enough to easily fit in a Marine’s pack and could soon provide a novel way to call in quick, accurate resupply drops.

The device is made to work in concert with Lockheed’s unmanned K-MAX helicopter, which is already providing Marines at forward operating bases in Afghanistan with everything from ammunition to water.

“The beacons provide K-MAX with improved accuracy, allowing the aircraft to deliver critical cargo to remote sites within three meters of the designated drop-off point,” Lockheed officials said in a news release following a recent demonstration of the device at Fort Pickett, Va. “Deliveries of cargo as large as a compact car can be placed down with pinpoint accuracy even at night or in harsh weather.”

During the April demonstration by the Army’s Aviation Applied Technology Directorate, K-MAX made 10 precision drops by honing in on a beacon. All were made within three meters of the target and two drops within one meter.

Neither the company nor Navy aviation officials could provide a timeline for fielding the device, though Lockheed said several beacons should eventually see field testing with Marines downrange. Two more demonstrations will be conducted by the Army in April 2013 and January 2014.

Two K-MAX helicopters have been downrange with Marines for nearly seven months, delivering more than 1 million pounds of cargo. The helicopter has performed well, and Marine officials have ordered an extension of the deployment to keep them flying in theater at least through September, according to Bettina Chavanne, a Lockheed Martin spokeswoman.

On average, the two deployed K-MAX helos fly about six missions per night, said Terry Fogarty, general manager for the unmanned aerial systems product group at Kaman Aerospace, the helicopter’s original builder. They’re able to fly up to 100 nautical miles round trip, depending on cargo payload. Flying primarily from large bases to smaller FOBs, they can accomplish resupply missions in less than an hour that would take 12 to 15 hours by ground convoy, he said.