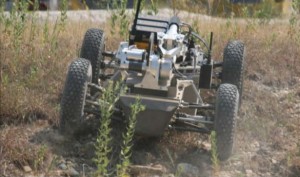 JIEDDO held its first challenge-based acquisitions event during the U.S. Army Robotics Rodeo June 20-29. The goal of the event was to find new ways to improve speed and freedom of maneuverability in the counter-IED environment using robotics. RE2 participated in the Endurance Challenge, which measured the speed and endurance of robots over a road meant to resemble the terrain of Afghanistan and Iraq. RE2’s ForeRunner UGV orded the fastest time to complete the dismount support, 8.6km, Counter-IED Endurance Robotics Challenge.

“We were pleased to learn that our ForeRunner robot won JIEDDO’s endurance challenge during the Robotics Rodeo last week,” stated Jorgen Pedersen, president and CEO of RE2. “Providing our troops with high-speed route inspection capabilities is crucial to keep our warfighters out of harm’s way. This award validates our claim that the ForeRunner, with a top speed of 40 KPH, is the fastest vehicle in the dismounted support class of UGVs.”

The ForeRunner is the fastest, most stable UGV of its class available on the market today. Originally designed under a U.S. Army Phase II SBIR as a high-speed scouting and inspection UGV, the ForeRunner combines the speed of a small scout UGV with the physical inspection capabilities of man-portable tracked robot. Its unique agility makes it capable of precision maneuvers not seen in other UGVs. The ForeRunner is an interoperable platform that can accept a variety of payloads, such as explosive detection sensors and manipulator arms, via its Joint Architecture for Unmanned Systems (JAUS) interface, enabling the vehicle to rapidly adapt to the mission at hand.