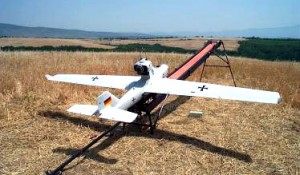 The Pakistan Navy has signed a contract on 27 June 2012 with EMT Germany to buy the LUNA UAS for its shore surveillance units (mainly Marines).

A total of 8 aircraft along with 2 ground control stations have been contracted for purchase. This has been done after a launch of official tenders and technical scrutiny of around 8 UAS, five of which were offered from China. Other contenders were Selex (Falco) and a company from Spain. In the end LUNA was selected for its price and because of its easy interoperability from small spaces. Pakistan Army is already using LUNA UAS for intel ops. The LUNA model contracted by the Pakistan Navy has an operational range of about 100 kms.