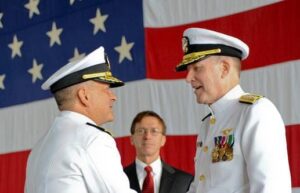 Pledging to build on his predecessor’s legacy of delivering proven warfighter capabilities, a new admiral took the reins of leadership for the Program Executive Office for Unmanned Aviation and Strike Weapons (PEO(U&W)) during a change of command ceremony on July 20.

Winter said he was inheriting the organization during daunting times, but had a vision for success, which focused on keeping the warfighter first and “bridging the ‘technical’ to the ‘tactical.’”

“Still at war, our nation faces daunting challenges across the political, military, economic, social, informational, infrastructure domains,” Winter said. “But we have a plan to tackle these challenges…This year, during this tour, my focus for PEO(U&W) builds upon that bridging and my strategic framework of people, organization and programs.”

For Shannon, who had overseen the program office for four years, the ceremony was also a platform to mark his retirement from the Navy after 37 years of service. He was responsible for supporting 100 percent of the total unmanned naval aviation inventory, as well as all air-launched naval precision and strike weapons. Under his leadership, PEO(U&W) programs delivered more than 1,800 new unmanned aircraft into the DoD inventory and more than 134,000 air-delivered weapons.

“Admiral Shannon and his team have maintained a razor-sharp focus on what the fleet needed, and they have worked tirelessly to deliver it—with sound judgment, uncompromising technical conscience, and a unique talent for understanding the acquisition environment and leveraging it to get things done for our warfighters, operating forward so that they could be ready,” said Vice Adm. David Architzel, NAVAIR commander, who was the guest speaker at the ceremony.

Architzel also recognized Winter for his accomplishments and added, “You have worked diligently throughout your career, and I cannot think of a more qualified person to assume command. As Admiral Shannon can attest, the sky is the limit in U&W, and I wish you great success in every endeavor.”

“As a former standout PM of one of the largest program offices within this PEO, the NAVAIR Weapons Center commander and the test lead for NAVAIR, Mat, is uniquely qualified for this job,” Shannon said. “He not only brings a wealth of experience but also a high level of energy and enthusiasm for this portfolio.”

In his new role, Winter will manage a total obligation authority of more than $46 billion and lead a workforce of more than 3,800 individuals.

“I’m committed to providing sound, effective and proactive leadership that will ensure expeditious, effective decisions are made to keep our programs moving forward,” Winter said.

A 1984 graduate of the University of Notre Dame with a Bachelor of Science degree in mechanical engineering, Winter received his commission through the Naval Reserve Officer Training Corps and was designated a naval flight officer in 1985. He holds a master’s degree in computer science from the Naval Postgraduate School and another in national resource strategy from National Defense University’s Industrial College of the Armed Forces.