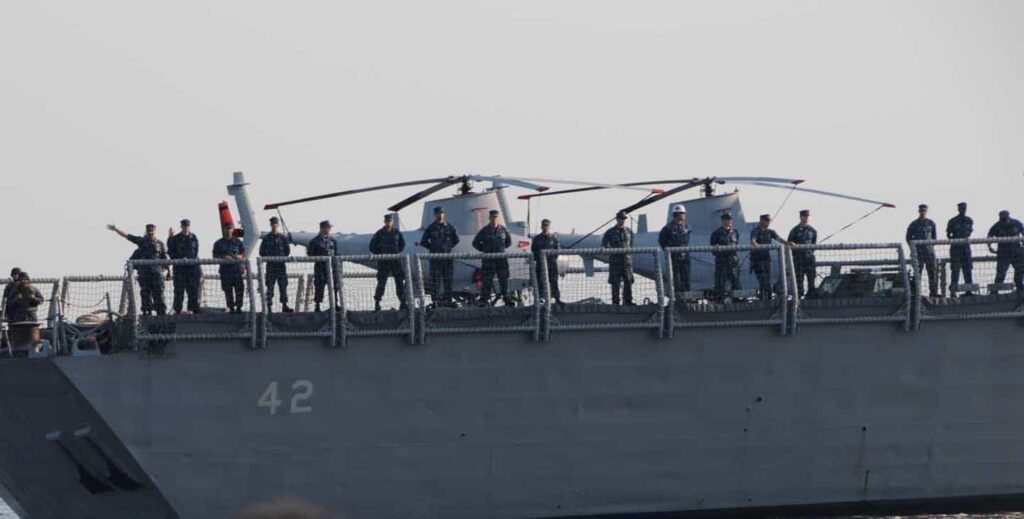 With a record number of Fire Scouts aboard the guided missile frigate, the Navy’s goal is to fly up to 12 hours a day and significantly increase real-time intelligence, surveillance and reconnaissance (ISR) support to combatant commanders.

“With each deployment, we are getting better and better at providing a maritime ISR capability, taking lessons learned each time and making improvements for future operations,” said Capt. Patrick Smith, Fire Scout program manager at Pax River. 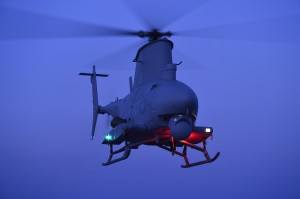 An MQ-8B Fire Scout in flight near Naval Air Station Mayport, Fla. during USS Klakring (FFG 42) pre-deployment workups in May 2012.

The history of HSL-42 and the MQ-8B dates back to 2008 when the detachment retrofitted USS McInerney (FFG 8 ) to accommodate Fire Scout for its first deployment.

Last year, HSL-42 deployed with two Fire Scouts and an H-60 helicopter aboard USS Halyburton (FFG 40). During this deployment, the detachment recorded more than 1,000 flight hours. Fire Scout flew 438 of those hours and set records for altitude range and endurance.

“This is our third deployment with HSL-42, who have become very familiar with the system,” Smith added. “Now they have the mission of flying two Fire Scouts simultaneously during operations, allowing the ship’s commander to keep a constant watch on a target of interest.”

The Navy and industry partner Northrop Grumman first demonstrated this capability in late 2011 and has since refined the techniques for use aboard Klakring and all future operations. An operator will provide commands to both air vehicles using a single-control station. The crew can replace aircraft low on fuel during a mission without losing site of the target.

“By having additional air vehicles aboard the ship and flying dual operations, we will have the ability to provide an increased maritime surveillance capability far greater than ever before with this unmanned helicopter,” Smith said.

The six-month deployment aboard Klakring coincides with Fire Scout operations in Afghanistan. Three MQ-8B aircraft have flown more than 2,500 hours, providing full-motion video and imagery to troops in the field. The Navy temporarily paused flights after a mishap in April, but operations resumed later that month.