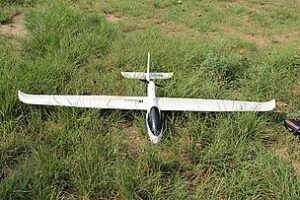 A successful test of two Unmanned Aerial Vehicles (UAV), or Conservation Drones, was carried out on 12 June 2012 in Chitwan National Park in Nepal’s Terai Arc Landscape. Introduced for the first time in Nepal by WWF Nepal with the support of WWF’s Asian Rhino and Elephant Action Strategy (AREAS), the Drones will be used for monitoring tigers and rhinos as well as illegal activities within the protected areas.

The test flight was conducted in the presence of Honorable Minister of Forests and Soil conservation, Yadu Bansa Jha, Director General of Department of National Parks and Wildlife Conservation, Chief Conservation Officer of Chitwan National Park, Nepal Army and representatives from WWF Nepal. 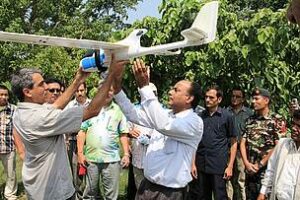 Serge Wich, one of the developers of the Drone, explaining the Drone's features to Hon. Minister of Forests and Soil Conservation, Yadu Bansa Jha.

The remote-controlled Conservation Drone is equipped with cameras and GPS to help capture images and video from hard-to-reach areas in the landscape thereby serving as a remarkable conservation tool. It is two meters in width and flies at a maximum elevation of 200 meters. It can cover a distance of up to 25 kilometers within a duration of 45 minutes.

The Conservation Drone was developed by Lian Pin Koh, an ecologist at the Swiss Federal Institute of Technology Zurich, and Serge Wich, a biologist at the University of Zurich, out of their interest to adapt and apply existing technology towards biodiversity conservation.

“WWF Nepal has been introducing new science and technology to aid ongoing conservation efforts in Nepal; the Conservation Drones are the latest addition,” said Mr. Anil Manandhar, Country Representative of WWF Nepal. “We believe that this technology will be instrumental in monitoring Nepal’s flagship species and curbing illegal wildlife trade,” he added.