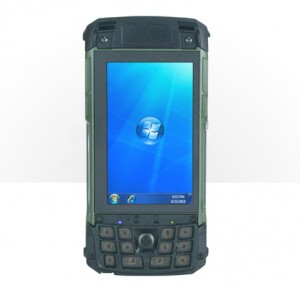 American Reliance, Inc. (AMREL) announced that their superlight, atom-based handheld, the ROCKY DB6, will be used as a payload controller and Operator Control Unit to demonstrate autonomous functions at the Robot Rodeo.

The Robot Rodeo will be held June 20 to 29 in Fort Benning, Georgia. AMREL is a member of a demonstration team that includes:
– MacroUSA, who will be providing the Armadillo and Scorpion Unmanned Ground Vehicles.
– RE2, who will be supplying the DS1-MA manipulator arm.
– 5D, whose software will enable autonomous functions.

DB6, a Commercial-Off-The-Shelf (COTS) product, is the smallest, fully rugged handheld in the world that can run full Windows or Linux OS.

As currently envisioned, the DB6 will be connected to a vest, worn by the operator. The vest will have batteries and antennas. The operator will have the option of pocketing the DB6, and switching to a game controller. 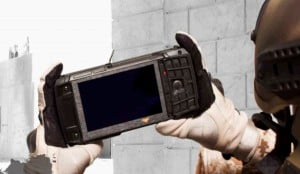 “This demo is being conducted with an eye toward dismounted forces, which is why the DB6 was chosen,” explained Ron McMahan, AMREL’s Vice President of Engineering Solutions. “It has ideal SWaP (Size, Weight and Power) for the mobile warfighter, who is already overburden by heavy equipment and batteries.”

“The really amazing thing is that in less than 30 days, off-the-shelf DB6s have been integrated into two robots to perform multiple functions,” McMahan added. “The DB6 has multiple, flexible I/O capability, which enables easy integration in numerous unmanned platforms. In addition, having a powerful computer at the payload will help with the ‘analytics’ of situational awareness, and relieve the crowded spectrum.”

Demonstrated autonomous functions include visualization and tasking. Also to be displayed is navigation, which includes guarded motion, obstacle avoidance, and mapping.