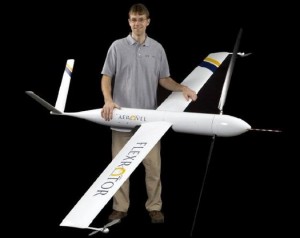 The United States is testing a new unmanned aircraft (UAV) with vertical takeoff and landing “Flexrotor” whose development is commissioned by the Navy. It should be noted that this idea is not new – similar planes were developed in the last century for the needs of the Navy. However, they were manned, and therefore, not particularly useful.

It so happens that in the history of warfare the very nature prompted people how to act to defeat the enemy. For example, a tall person is more likely to notice someone who is shorter, but for the latter it is easier to hide from the former. One can become taller by climbing a tree or survey the area hiding behind its branches from the top.

When the first hot air balloons appeared, people very quickly tried to use them for observations from the air, and then throw explosive shells on the heads of the enemy from them. For example, in 1849 such a balloon bomber was launched from the deck of an Austrian ship, and during the U.S. Civil War between North and South, such balloons, equipped with a telegraph, were used by the troops of the northerners.

Relatively high speed of the destroyers in early 20th century suggested sailors another possibility of nearly vertical take-off from the deck of the ship – a tethered kite. These kites were run on the Baltic Sea, for example, in 1903. The kites had antennas of the radios located on board the ship attached to them, which enabled them to increase the range of up to 63 miles.

However, apart from the antenna, the kites could be the eyes of the ship, because an observer was located in the basket suspended underneath. A year later, Russian navy obtained the first ship “Russia” with hot air balloons on board that could quickly raise and lower using a winch.

Vehicles with vertical take-off in the first place attracted the attention of the sailors, but why? Primarily because special ships with a horizontal takeoff require a large flight deck, are very complex and very expensive. That is why during the two world wars, aircraft for protecting ships from attacks from air were mounted on reconnaissance vessels, battleships, and cruisers. In some cases, there were “one way” aircraft. That is, they were launched with a catapult, and, after fulfilling their task, they landed next to their ship that the pilots have left by then, and then sank.

Interestingly, there were attempts to create ground-based “vertical” planes. The most famous of these projects was a German fighter-interceptor Bachem Ba 349 Natter, created at the end of World War II. This technological miracle that looked like a rocket rather than a plane could take off from the vertical guide mast 15 meters high. It is also interesting that Ba 349 had no cannons or machine-gun armament, but was the first aircraft equipped with rockets (admittedly, quite uncontrollable).

Bachem Natter at the time finally discredited the idea of ​​an aircraft with vertical take-off, as the aircraft could take off properly, but could not land. When a fighter would run out of fuel, the pilot would trigger the mechanism of disconnection of the fuselage. As a result, the pilot and the engine landed on their own parachutes, and the fuselage would break against the ground. Understandably, this way of completing a mission was not satisfactory, and engineers refused to develop this idea further.

Later the designers went back to the idea of ​​such aircraft for naval aviation. They created a multitude of different vertical takeoff aircraft designed to launch to the sky from the deck. They could not only fly, but land as well. For example, in 1949, plane with two coaxial screws HFY-1 “Pogo” rose to the sky. It could land on four points of support on the wings and tail.

Since on the vertical models the view from the cabin was compromised, a special mirror was used, similar to one in a car. The limited visibility when landing, as noted by a test pilot, could be compared to a view from the car when driving into a garage in reverse. He also stated that “flying was no more difficult than on any other modern fighter, and that takeoff and landing require less attention than would a high-speed fighter, and the behavior of the aircraft in hover mode was perfectly satisfactory.

However, the aircraft was not accepted into service, partly because it was very difficult to get into its cabin. Naturally, the unmanned aircraft of this type does not need a cabin, which is why today the attention of the military of various countries is increasingly drawn to the drones with the capacity for vertical takeoff and landing.

One of these new products, most recently, was the UAV Flexrotor that combines the convenience of a vertical take-off and landing with the airplane speed and altitude of a horizontal flight. It was ordered by the U.S. Navy, and now this UAV already does an excellent job with the takeoff and landing, as well as with the flight. For its creators the main problem is its adaptation for use on board naval ships.

The new UAV is not that small with a wings span of three meters and rotor diameter of 1.85 meters. At the same time, its weight is very small for this size and is only 19.2 kilograms. The amount of fuel on board is such that it enables it to climb at a speed of up to one meter per second, while in level flight it travels at speeds up to 145 kilometers per hour, remaining in the air for over 40 hours.

The new aircraft has a tail unit that opens immediately after the start and goes into horizontal flight. To return back and land, it picks up speed at 130 miles an hour, goes to a vertical mode and just hangs in the air, then drops to its launch platform.

For the first time these impressive maneuvers in the air were demonstrated in August of 2011. Then the test was continued in light winds and went well. Now the developers have a new and rather difficult task: to improve the system control unit in such a way that it could cope even with the strong wind.

A special automated service platform that not only ensures its safe start and return, but refueling without human intervention is being especially developed for the new apparatus. Moreover, this platform can be installed not only on board the ship, but generally anywhere: for example, in the jungle, or atop a mountain. It will prepare for the next run completely independently, and all information will be transferred by telemetry.