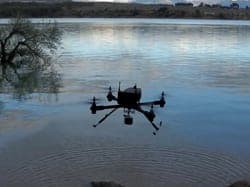 University of Granada researchers have developed a 3D imaging system that scans 3D models of historical buildings using data obtained from an unmanned aerial vehicle (UAV)–an aircraft without a human pilot onboard. This is the first 3D imaging system to combine the use of UAVs, image-based 3D modeling technologies, and virtual representation of models to produce a realistic modeling of 3D objects from images.

The endpoint of this project is to obtain a 3D model of a historical building façade –as a cathedral–without any human intervention and at a lower cost than other technologies currently available (as 3D scanners). To date, UAVs have been used in many research fields, as they are fast and they can overfly abrupt areas, avoid large obstacles and provide information from multiple sensors.

No Scaffolding or Cranes

While UAVs autonomy is limited, they can descend for an operator to change the battery (an operation requiring just a few seconds), and then resume its task. This way, the object can be scanned in record time without the need for scaffolding or cranes.

The multiple applications of this technology are evident, as they offer an autonomous device that in just some minutes can scan a façade with as much or a higher precision than 3D scanners. It is noteworthy that this device can get close to the object up to a few inches to obtain the smallest and unreachable details.

This project focused on façade 3D imaging is intended to prove the applicability of this new technology to any type of architectural model: buildings, monuments, etc. What these objects have in common is that digitalization is performed in vertical parameters and that objects are geolocalized.

Finally, this Project is also supported by the Patronato de la Alhambra y el Generalife an CETURSA Sierra Nevada S. A, which belongs to the Junta de Andalucía.

By University of Granada. For more information visit www.canal.ugr.es.