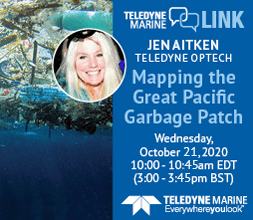 The Pacific Ocean is a hotspot for waste that we dump from our coastal cities or lose overboard from ships. Its currents push the trash into the middle of the ocean where it remains for years, concentrated into a region called the Great Pacific Garbage Patch. Scientists and environmentalists are considering ways to reduce plastic waste including Ocean Cleanup who have came with the idea of using static floating barriers that could capture trash before it could break down. First, however Ocean Cleanup needed to know where to deploy its barriers and how much garbage to expect. This is where Teledyne Optech’s CZMIL bathymetric airborne lidar sensor came in. We’ll share the project details, technology and results with our webinar attendees.