Our platforms are constructed from high-quality components, including aerospace-grade wiring and military-grade connectors, and are rigorously tested under extreme conditions.

The DeltaQuad Pro series of fully electric UAVs is designed for high stability in both quadcopter and fixed wing mode, transitioning smoothly between the two and providing flight times of up to 160 minutes and operational ranges of up to 150 km. The unmanned aircraft feature fully autonomous operation from takeoff to landing, with communications options providing up to 30 km radio range, or potentially unlimited range using VPN secured mobile networks.

Based around the open-source PX4 professional autopilot firmware and Pixhawk flight controller ecosystem, the DeltaQuad platform is highly customizable with constantly tested and updated avionics. With a 1.2kg payload capacity, DeltaQuad can field a wide variety of payloads, including image and video cameras, environmental sampling sensors, and custom integrations.

Each DeltaQuad UAV is supplied with flight simulator software that allows users to test-fly potential missions and get acquainted with the ground control station before flying under real-world conditions. Other software tools provided for the DeltaQuad platform include an online flight log visualization system and a Mission Validator that allows pilots to ensure that a mission plan follows best practices and is safe to fly.

The DeltaQuad Pro #CARGO is an industrial-grade VTOL fixed-wing UAV designed for cargo transport and integration of custom payloads. Featuring a large payload bay directly over the centre of gravity of the aircraft, the rugged aircraft is constructed from EPO plastic foam, giving it high resistance to impact.

The unique payload bay mechanism, allowing the drone to drop cargo with or without parachutes, can be programmed to release as part of an autonomous flight plan, or directly remote controlled via the GCS. The bay can hold packages measuring up to 15 x 10 x 9 cm and weighing up to 1 kg.

The DeltaQuad Pro #MAP is a commercial-grade VTOL fixed-wing mapping UAV with a fully integrated payload mount that fits a variety of high-grade camera payloads from leading manufacturers including Sony and Micasense. 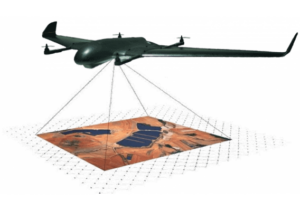 The aircraft is fitted with a toughened Asahi Dragontail glass window in the bottom of the payload bay, protecting camera payloads from dust or damage during takeoff and landing. Covering up to 1200 hectares in a single flight, the DeltaQuad Pro #MAP can achieve a resolution of 3cm/px, with centimetre-level accuracy available with a PPK payload option.

The DeltaQuad Pro #VIEW is a commercial-grade VTOL fixed-wing UAV for high-end surveillance applications, with a variety of payload package options ranging from static RGB cameras to controllable EO/IR gimbals, all matched with a carefully selected video transmission system for optimal quality and range.

The fully autonomous or remote-controlled DeltaQuad Pro #VIEW features a flight endurance of up to 160 minutes, with the ability to cover up to 150 km in a single flight.

Static nose camera solution
Based on the Runcam Split 2 and incorporating a 1.5 Watt 1.2Ghz video transmitter with up to 20km range. The package includes a video receiver and FPV field monitor that can run for up to 6 hours on the provided ground station battery.

The DeltaQuad Pro #INSPECT is a commercial-grade VTOL fixed-wing UAV for a wide variety of inspection applications such as utilities, disaster response and wildlife monitoring. 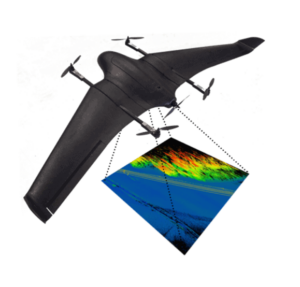 The fully autonomous aircraft can be easily programmed to undertake terrain-following corridor scans, and can cover up to 100km in a single flight.

The aircraft is designed to be equipped with either the FLIR Duo Pro R thermal and 4k RGB sensor, or the MapIR Survey3 RGB or NIR sensor. Recorded images and video can be georeferenced with GPS coordinates. 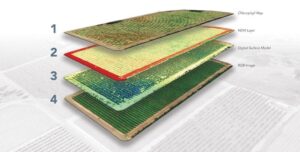 The DeltaQuad Pro #MAP is an ideal platform for agriculture and forestry, capturing data with state-of-the-art sensors and providing results that can be used for critical actionable intelligence. Orthomosaic maps and 3D models can be created with cameras up to 61 MP in resolution, and the Micasense RedEdge MX provides multispectral imaging for precision information on plant health.

The DeltaQuad Pro #MAP is an ideal platform for agriculture and forestry, capturing data with state-of-the-art sensors and providing results that can be used for critical actionable intelligence. Orthomosaic maps and 3D models can be created with cameras up to 61 MP in resolution, and the Micasense RedEdge MX provides multispectral imaging for precision information on plant health.

The DeltaQuad Pro #INSPECT can autonomously survey up to 100km of pipeline and monitor remote sites at up to 50km away, detecting defects, leaks, corrosion and hazards with high resolution thermal and RGB video. The system can also fly predefined corridors with automatic terrain following.

In a single flight, the DeltaQuad Pro #INSPECT can survey up to 100KM of power lines, water pipes railways or roads, or up to 1000 ha of solar panels, providing remote monitoring at distances of up to 50 km away. Combined thermal and RGB video capabilities provide damage, fault and hazard detection as well as water leak and vegetation monitoring. 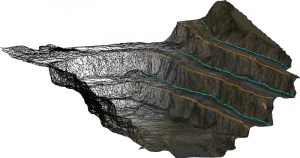 The DeltaQuad Pro #MAP provides a range of advantages for mining and construction applications, delivering high resolution geospatial information with centimetre-level accuracy. This information can be used to create orthomosaic maps and 3D quarry models, calculate volume stockpiles, and more.

The DeltaQuad Pro #VIEW is highly suited to aerial reconnaissance missions, providing live thermal and HD RGB video with a transmission range of up to 30 km, or unlimited range using a mobile network. The platform’s VTOL operation allows it to be deployed in almost any environment, with a setup time of just two minutes.

The DeltaQuad Pro #CARGO can transport goods to and from remote areas, with the ability to take off and land even in highly confined terrain. With a payload capacity of 1.2 kg, it can be used to deliver vital cargo including medical supplies, blood samples and nutritional aid.

The DeltaQuad Pro #VIEW provides a multitude of essential capabilities for rangers and wildlife professionals. The RGB and thermal imaging camera can be used for anti-poaching missions, to detect and observe wildfires, to track animals and to provide aerial reconnaissance in dangerous areas.