Manufacturers and suppliers of gyroscopes, FOG gyros and reference units for UAVs, drones, ROVs and AUVs.

What is a gyroscope? 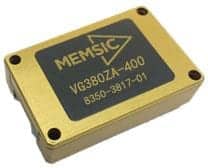 Gyroscopes, or gyros, are devices that are used to sense angular velocity and thus measure motion and orientation. The basic mechanical gyroscope design consists of a spinning wheel mounted on an axle that is free to assume any orientation, with the entire construct mounted on a gimbal. Due to conservation of angular momentum, the axle orientation will be unaffected by tilting or rotating the entire device. Gyros can therefore be used to measure changes in relative position between the device and any platform it is mounted on.

Gyroscopes may also be based around other operating principles. MEMS (microelectromechanical systems) gyroscopes utilise the Coriolis effect, measuring the tangential acceleration of a vibrating mass on a rotating platform. MEMS gyroscopes are typically very small and are packaged like integrated circuits, with analogue and digital outputs.

Fiber optic gyroscopes (FOG) utilise the interference pattern from two laser beams passed into the same optical fibre in different directions. The beam travelling against the direction of rotation experiences a shorter path delay, and this difference can be measured. 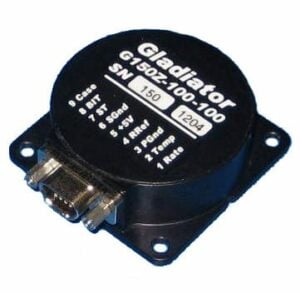 Three gyroscopes mounted at right angles to each other can sense angular velocity on all three axes – yaw, pitch and roll. These three-axis gyroscope sensors can be used to detect when a drone or unmanned vehicle rotates in any plane, and this information can be used to stabilise the vehicle in flight and compensate for the effects of wind.

Six-axis gyroscopes incorporate a three-axis accelerometer that allows the system to also measure the amount of static acceleration due to gravity and deal with more complex movements.

Gyroscopes, along with accelerometers and other sensors such as magnetometers, are used to create IMUs (inertial measurement units), which fuse together outputs from all these sensors and provide information that can be used to calculate a drone’s orientation and velocity.