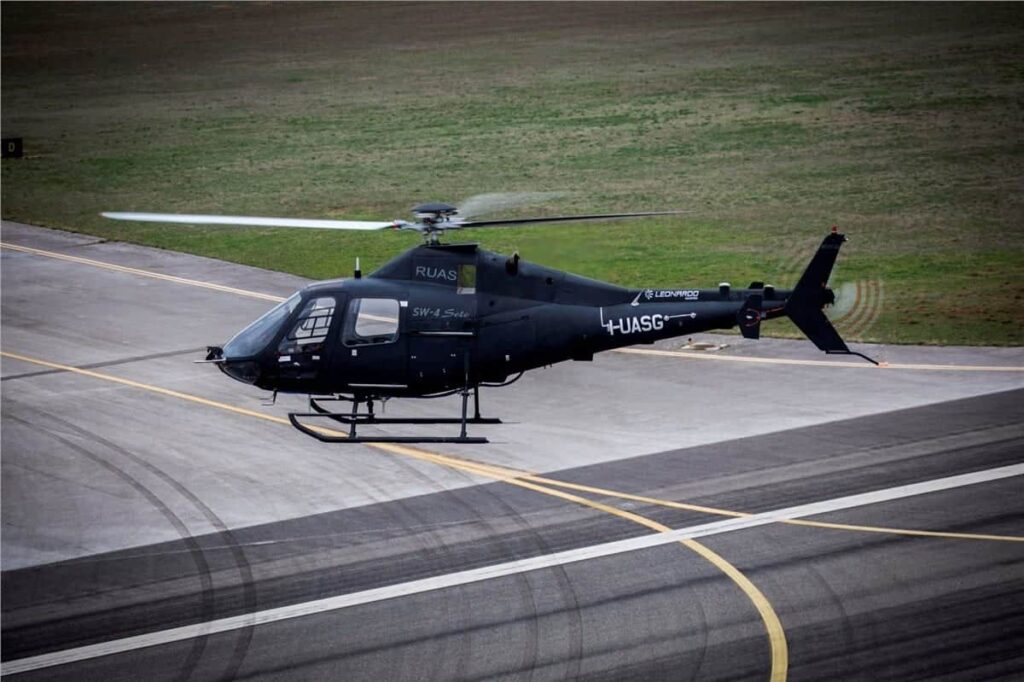 Leonardo has announced that its SW-4 Solo optionally piloted helicopter has successfully completed its maiden flight with no safety pilot onboard at Taranto-Grottaglie Airport in southern Italy. The unmanned aircraft flew for 45 minutes and all systems performed as expected with excellent controllability and handling qualities. Tests included, among others, remote engine start up and shut down with ground run, automatic take-off and landing, hovering OGE (Out of Ground Effect) and acceleration to forward flight, automatic way point navigation to and from the area of operation and simulation of a surveillance mission. The aircraft reached an altitude of 1500 ft and up to 60 knots airspeed during the flight.

Alessandro Profumo, Leonardo CEO, said “This latest achievement provides further evidence of Leonardo’s leading role in Europe in developing ‘unmanned’ air systems, a sector in which we’re committed to expanding our already significant presence. I would also like to thank Grottaglie Airport and the aviation authorities for their contribution to the successful achievement of this milestone.”

The Solo RUAS/OPH (Rotary Unmanned Air System/Optionally Piloted Helicopter), derived from the SW-4 helicopter produced by Leonardo in Poland and equipped with advanced systems and sensors also made by the company in Italy and the UK, is designed to operate with or without a pilot on board. Test campaigns have been held in Grottaglie with a pilot onboard since December 2016, combined with various trials in Poland, in order to verify the aircraft’s operational characteristics and validate flight procedures, in both normal and emergency conditions.

Earlier activities in Italy were part of a collaboration between Leonardo, Aeroporti di Puglia (AdP) and the Distretto Tecnologico Aerospaziale Pugliese (DTA) for the “Grottaglie Test Bed”, which is a candidate to become the Italian solution for national and European industry demands for unmanned aircraft testing. The validation of procedures and regulations for the use of unmanned aircraft are among its key objectives. The trials benefitted from the strong collaboration with ENAC (the Italian Civil Aviation Authority) and ENAV (the Italian Air Navigation Service Provider). The SW-4 Solo had also been involved in other successful demonstrations in Italy and the UK.