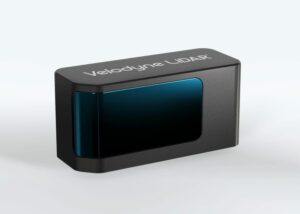 Velodyne LiDAR has announced its new fixed-laser, solid-state Velarray LiDAR (Light Detection and Ranging) sensor, a high-performance and rugged automotive product in a small form factor. The Velarray sensor can be embedded in both autonomous vehicles and advanced driver-assist safety (ADAS) systems.

Velodyne LiDAR invented and patented the world’s first 3D real-time LiDAR sensors in 2005. Its surround-view sensors provide up to 360-degree coverage at long range and have been installed in thousands of vehicles. The Velarray was developed at Velodyne Labs, the company’s advanced research and development group, to combine the performance and reliability of its legacy LiDAR sensors with a small form factor to deliver new technology and flexibility for enabling advanced safety and autonomous vehicles.

The new Velarray LiDAR sensor uses Velodyne’s proprietary ASICs (Application Specific Integrated Circuits) to achieve superior performance metrics in a small package size of 125mm x 50mm x 55mm that can be embedded into the front, sides, and corners of vehicles. It provides up to a 120-degree horizontal and 35-degree vertical field-of-view, with a 200-meter range even for low-reflectivity objects. With an automotive integrity safety level rating of ASIL B, Velarray will not only ensure safe operation in L4 and L5 autonomous vehicles but also in ADAS-enabled cars.