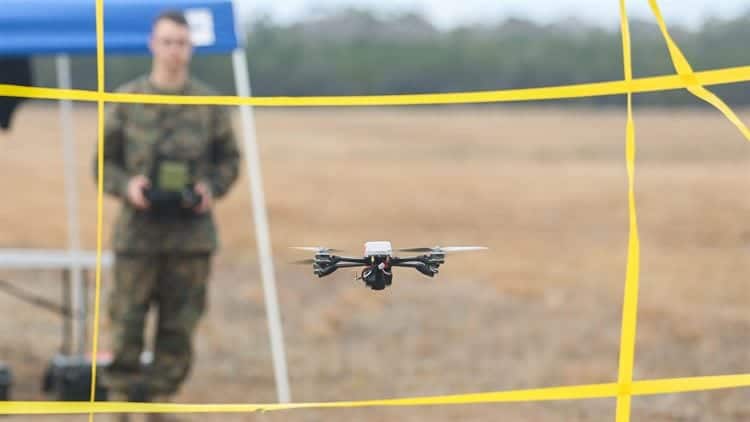 The U.S. Marine Corps has announced that it has tested the capabilities of a new drone known as the Instant Eye. The system was tested by a team of four Marines with Task Force Southwest at Marine Corps Base Camp Lejeune, N.C.

Throughout Operation Enduring Freedom and Operation Iraqi Freedom, the armed services used unmanned aerial equipment to capture imagery of battlespaces, execute reconnaissance and conduct airstrikes on enemy targets. These devices proved indispensable in their abilities to move quickly and clandestinely.

Unlike other drones which require either a runway or throwing for takeoff, the Instant Eye is capable of launching and landing at 90 degree angles.

“We can take off in any direction we want, and we can hover if we need to, which is a significant difference when it comes to maneuverability. That technology is great,” said Shaun Sorensen, a SUAS instructor with Training and Logistics Support Activity.

The aircraft’s small size allows for optimum stealth. It uses rotary wing as opposed to fixed-wing capabilities, allowing for the device the move through tightly-confined spaces such as buildings, around corners and up and over walls and hills.

“We can send this thing ahead and it can look for us,” said Cpl. Isaac Brown, an intelligence specialist with Task Force Southwest. “We don’t have to send Marines not knowing what’s on the other side of any obstacle.”

“It reduces the need for forward observation… and can take some of the risk out of patrolling,” added Sorensen.

The Marines also practiced maneuvering the Instant Eye at night, through and around obstacles, and inside in order to bolster their flying skills in preparation for a nine-month deployment to Helmand Province, Afghanistan.

Above all, the aircraft will greatly diminish the need to send Marines into possibly hostile areas without knowing key factors beforehand, such as the number of enemy troops or equipment.

“The Instant Eye is going to be a great tool for operations in Afghanistan; it allows us to go places we wouldn’t necessarily want to for our first look,” said Brown. “These systems are going to be invaluable to force protection.”

Task Force Southwest is comprised of approximately 300 Marines whose mission will be to train, advise and assist the Afghan National Army 215th Corps and 505th Zone National Police. The unit is scheduled to deploy soon.