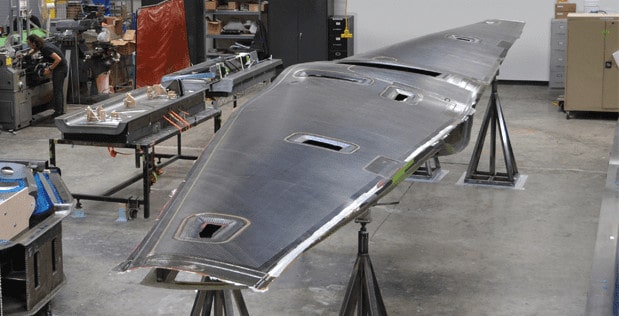 DARPA has announced that it has tasked Northrop Grumman with building a second test vehicle for Tern, a joint program between DARPA and the U.S. Navy’s Office of Naval Research (ONR) that seeks to greatly increase the effectiveness of forward-deployed small-deck ships such as destroyers and frigates by enabling them to serve as mobile launch and recovery sites for specially designed unmanned air systems (UASs). DARPA awarded Phase 3 of Tern to a team led by Northrop Grumman to build a full-scale technology demonstration system. The program has since made significant advances on numerous fronts, including commencement of wing fabrication and completion of successful engine testing for its first test vehicle.

“DARPA has been thinking about building a second Tern test vehicle for well over a year,” said Dan Patt, DARPA program manager. “Adding the second technology demonstrator enhances the robustness of the flight demonstration program and enables military partners to work with us on maturation, including testing different payloads and experimenting with different approaches to operational usage.”

Tern envisions a new medium-altitude, long-endurance UAS that could operate from helicopter decks on smaller ships in rough seas or expeditionary settings while achieving efficient long-duration flight. To provide these and other previously unattainable capabilities, the Tern Phase 3 design is a tailsitting, flying-wing aircraft with a twin contra-rotating, nose-mounted propulsion system. The aircraft would lift off like a helicopter and then perform a transition maneuver to orient it for wing-borne flight for the duration of a mission. Upon mission completion, the aircraft would return to base, transition back to a vertical orientation, and land. The system is sized to fit securely inside a ship hangar for maintenance operations and storage.

Tern has accomplished the following technical milestones for its test vehicle in 2016:

Wing fabrication: Since Phase 3 work started at the beginning of 2016, Tern has finished fabricating major airframe components and anticipates final assembly in the first quarter of 2017. Once complete, the airframe will house propulsion, sensors, and other commercial off-the-shelf (COTS) systems to make up the full-scale technology demonstration vehicle.
Engine tests: In Phases 2 and 3, Tern has successfully tested numerous modifications to an existing General Electric engine to enable it to operate in both vertical and horizontal orientations. This type of engine was chosen because it is mature and powers multiple helicopter platforms currently in use.
Software integration: Tern opened its Software Integration Test Station (SITS), part of the System Integration Lab that supports software development for the program. The test station includes vehicle management system hardware and software, and uses high-fidelity simulation tools to enable rapid testing of aircraft control software in all phases of flight. The SITS is helping ensure the technology demonstration vehicle could fly safely in challenging conditions such as launch, recovery, and transition between horizontal and vertical flight.

Additional tests are due to start. A 1/5th-scale version of the approved vehicle model is in testing in the 80’ x 120’ wind tunnel at the NASA Ames Research Center’s National Full-Scale Aerodynamics Complex (NFAC). Data collected during this test will be used to better characterize aircraft aerodynamic performance and validate aerodynamic models.

“We’re making substantial progress toward our scheduled flight tests, with much of the hardware already fabricated and software development and integration in full swing,” said Brad Tousley, director of DARPA’s Tactical Technology Office, which oversees Tern. “As we keep pressing into uncharted territory—no one has flown a large unmanned tailsitter before—we remain excited about the future capabilities a successful Tern demonstration could enable: organic, persistent, long-range reconnaissance, targeting, and strike support from most Navy ships.”

Tern is currently scheduled to start integrated propulsion system testing in the first part of 2017, move to ground-based testing in early 2018, and culminate in a series of at-sea flight tests in late 2018.

DARPA and the Navy have a Memorandum of Agreement (MOA) to share responsibility for the development and testing of the Tern demonstrator system. The Marine Corps Warfighting Laboratory (MCWL) has also expressed interest in Tern’s potential capabilities and is providing support to the program.