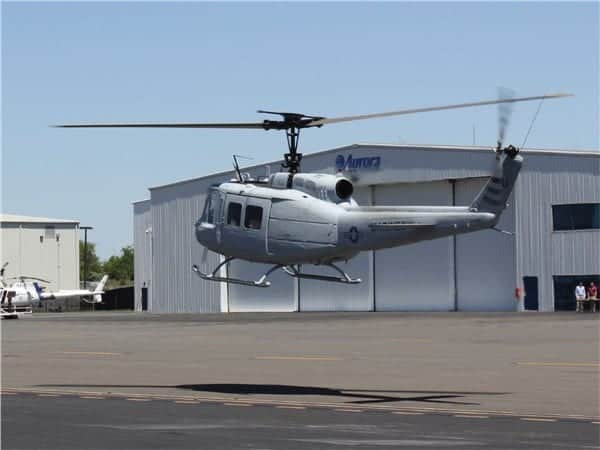 Aurora Flight Sciences has announced that it will be integrating the company’s Tactical Autonomous Aerial Logistics System (TALOS) on a Huey UH-1H helicopter, leveraging its work on the Autonomous Aerial Cargo Utility System (AACUS) program.

The primary goal of the AACUS program is to enable rapid cargo delivery by unmanned, and potentially optionally-manned, VTOL systems. AACUS encompasses the development and implementation of VTOL-based obstacle detection and avoidance, and allows for autonomous landings at unprepared, off-field, non-cooperative landing sites. AACUS also enables dynamic contingency planning to the point of landing, with goal-based supervisory control by any field personnel with no special training.

At the AACUS flight testing event held in Northern Virginia, the AACUS program demonstrated on a manned Bell 206 the perception and planning capabilities required for autonomous takeoff, transit and landing. “We know how to make things fly, we’ve been doing it for over 100 years,” said Retired Brig. Gen. Frank Kelley, the Deputy Assistant Secretary of the Navy for Unmanned Systems. “What we don’t yet know how to do, is how to couple aircraft and autonomous systems together, but great programs like this are helping us get there.”

Aurora’s TALOS system has been demonstrated previously on a Boeing H-6U Unmanned Little Bird flown autonomously, and three different human-piloted Bell 206 aircraft. “The arrival of a Huey as our third test platform frames a key point for future customers – the TALOS system is platform agnostic; you’re not buying a new fleet of helicopters, you’re buying a capability set for your current fleet,” said John Wissler, Vice President of Aurora’s R&D Center in Cambridge, Massachusetts. “TALOS is not an aircraft, nor is it a robot flying an aircraft –TALOS is transferable intelligence designed with both manned and unmanned aircraft requirements in mind. The value of TALOS can be described in a few words – platform agnostic, scalable autonomy, onboard sensing of the environment, and on-board intelligence that no other system in the world can provide.”

Commercial applications for the TALOS technology are also being explored by Aurora. “Think of the civilian first responder pilot attempting to land in a remote, storm-ravaged area at night – TALOS senses and alerts to power lines and landing zone obstacles well before the pilot and informs the pilot’s maneuvers,” said Wissler.