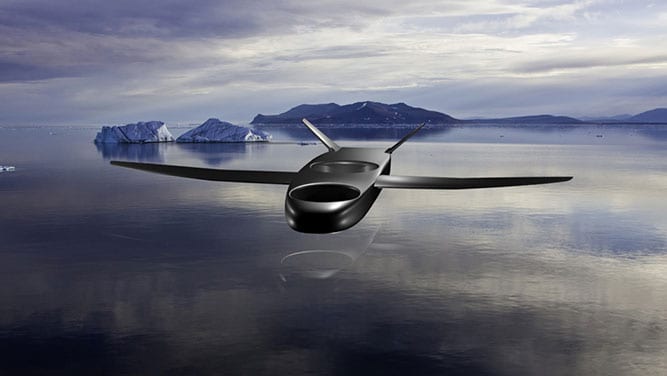 Sky-Watch, a developer of unmanned aerial vehicle (UAV) systems, has announced that it will be unveiling a prototype of its new MUNINN VX1 hybrid drone design at the Nordic UAS Event. In cooperation with DTU Space and DTU Environment, Sky-Watch has developed the new type of hybrid UAV to help solve tomorrow’s environmental challenges.

Sky-Watch’s ambition was to merge two proven technologies and effectively combine the best features from a helicopter with those of an airplane. The MUNINN VX1 design incorporates the ability to take off and land vertically in small or constrained spaces, combined with the ability to cruise horizontally at high speed to cover larger geographical areas and quickly reach objects or points of interest.

The MUNINN VX1 is partly funded by a grant from the Danish Government through the latter’s Innovation Fund.

“The MUNINN VX1 will have the potential to change our understanding of where and for which tasks a fixed-winged UAV can be deployed. The MUNINN VX1 will in time utilize cutting edge technology from our strategic partners to push the boundaries as we know them,” says Sky-Watch Chief Business Development Officer Michael Messerschmidt.

The MUNINN VX1 has already attracted the attention of leading global aerospace companies. This was demonstrated by the signing of a Memorandum of Understanding with The Boeing Company, who announced its interest in supporting the project in October 2014, potentially providing access to technology and the vast know-how of the design of advanced aero structures.

“For Sky-Watch the MUNINN VX1 is more than a single product in the portfolio, it represents the future of our industry. The MUNINN VX1 project is a perfect example of how the benefits of cooperation across industry and universities, in conjunction with government co-funding, can accelerate cutting-edge technology development in a growth industry,” says Michael Messerschmidt.

The potential of the UAV technology was recently highlighted in a report from Oxford Research Institute, sponsored by UAS Denmark, which concluded that the Danish UAV industry have the potential to generate up 15.000 jobs by 2050, provided that seed funding and the legal framework is provided by the Danish government.