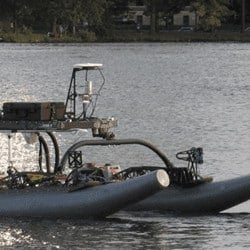 After months of preparation and three days of actual competition, the MIT-Olin team won first place in the final standings of the 2014 AUVSI Maritime RobotX Challenge in Singapore.

The team came in first place overall, second place in land-based judging, and first place in the best paper category with their unmanned vessel, the USV: Athena-Nike.

Students from 15 universities around the world traveled to Singapore for the competition.

All the teams had to outfit an unmanned surface vehicle with sensors, computers, and software and get the vehicle to complete a course based on various maritime missions. On the course, each team’s vessel has to complete a set of tasks including the avoidance and detection of obstacles, identifying and reporting on a specified target and searching underwater for an acoustic source.

Team Faculty Advisor, Prof. Dave Barrett said, “Team MIT-Olin is very pleased to have won first place in the very first Robot-X maritime challenge. This was a very difficult set of races and it was an honor to be able to compete in an international venue with 15 strong, talented teams from some of the best engineering institutions in the world. I am very proud of what our team has accomplished and this contest really showcases what a combination of Olin’s ‘Can-do’ engineering spirit and MIT’s advanced technological wizardry can achieve. ”

The competition, held at The Float at Marina Bay in Singapore, was jointly organized by the National University of Singapore Faculty of Engineering, Science Center Singapore, and the Association for Unmanned Vehicle Systems International Foundation.

The Athena-Nike was a joint partnership between the Massachusetts Institute of Technology and Olin College.