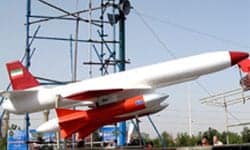 Speaking at a press conference in Tehran on Sunday, Jafari pointed to Iran’s latest achievements in area of Unmanned Aerial Vehicles (UAVs) production, and stated, “Shahed 129 drone presents the IRGC’s latest advancement in this field. With its 24-hour-long non-stop flight capability, the drone can accomplish good missions in reconnaissance and combat fields.”

The commander added that Shahed 129 can hit and destroy targets from a far distance with its Sadid (Iron-Strong) missiles.

Earlier this month, a senior Iranian defense official announced that Iran plans to equip its military drones with missile capabilities.

“We observed the operation of Iran’s combat Unmanned Arial Vehicles (UAVs) in the recent wargames conducted by the Islamic Revolution Guards Corps (IRGC) and we plan to mount missile systems onto these drones,” Deputy Defense Minister for Industrial and Research Mohammad Eslami told FNA at the time.

In March 2012, Iranian experts managed to produce a new type of drone which is capable of carrying out military and border patrol missions.

The new remote-controlled aircraft, called Shaparak (Butterfly), has a maximum operational radius of 50 kilometers (31 miles), and a maximum flight ceiling of 15,000 feet (4,572 meters), Reza Danandeh Hakamabad, the aeronautics engineer in charge of the project, said at the time.

The aircraft is capable of three and half hours of non-stop flying, and can carry an 8-kilogram (17-pound) payload.

In February 2011, Iran inaugurated the production line of two home-made UAVs with bombing and reconnaissance capabilities.

Ra’d which is a UAV of choice for assault and bombing missions has the capability to destroy the specified targets with high pinpoint precision.

The combat drone, named Karrar, was unveiled in a special ceremony in Tehran marking the national ‘Day of Defense Industry’.

The Karrar UAV is capable of carrying a military payload to carry out bombing missions against ground targets. It is also capable of flying long distances at a very high speed.