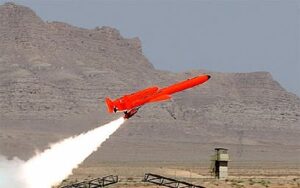 Eslami told the Fars news agency that the recent drills conducted by the Revolutionary Guards employed fighter drones, adding that they are now installing missiles on these Unmanned Combat Air Vehicles UCAVs.

According to the report, this will be Iran’s first long-range unmanned combat air vehicle and it can bomb targets at high speed and has a range of 1,000 kilometers.

Eslami noted that the drone had been built based “covert and overt sources” and mentioned the downing of the US drone by the Revolutionary Guards.

Tehran often claims to have made scientific and military breakthroughs but in most cases fails to produce evidence of this. Consequently, the West does not always take these announcements seriously.

Meanwhile, Mohammad Ali Jafari, the commander of the Revolutionary Guards said that Iran is “past” the threats and now sees its main challenge as the “soft war” – the Iranian term for a cultural war waged in the West in the purpose of inserting western values into Iran.

“With each day that goes by the enemy realizes it cannot force its will on Iran,” he told academics in Mashad. “Naturally they threaten to strike but this is meant to serve their other goals too.”

He further added, “They lack the courage to realize those threats and have recently even avoided voicing them.”

His statements contradict the public debate in the US on a possible strike in Iran.