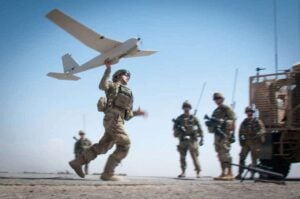 Images from spy planes and sensors that detect wires that trigger explosives have helped to mitigate the No. 1 threat to U.S. troops in Afghanistan — roadside bombs — over the past year.

The Pentagon has filled the skies over Afghanistan with high-tech sensors, and the effect has been measurable. From March through May, troops in vehicles found 64 percent of improvised explosive devices before they blew up, an 11 percentage-point increase over the previous quarter. Troops on foot patrol discovered 81 percent, a 4 percentage-point increase, according to the Pentagon’s Joint IED Defeat Organization (JIEDDO).

The rate of discovery before bombs exploded hovered around 50 percent for years. The most important measure of progress: IEDs caused less than half of troop deaths for the first time in five years.

“We are, in terms of detection of all types of IEDs, vastly better than we were a year ago,” Deputy Defense Secretary Ashton Carter told USA TODAY in an interview. He credited airborne surveillance with driving progress against IEDs.

Detectors on aircraft, first used in Iraq, have successfully assisted troops in locating wires attached to bombs, which allows them to be defused. Radar is trained on the Afghan-Pakistani border, giving commanders a view of bombmakers’ escape and supply routes.

“Where we still have a problem… is in the use of Pakistani territory: safe haven, safe supply,” Carter said. “But we’ve gotten better at interdicting those sources of supply with, for example, airborne radars to watch people as they come over the desert or over the mountains. Those have been introduced during the last year.” He did not specify the aircraft or detection systems used. But the Pentagon has fielded new systems in the past three years aimed at finding command wires or ground that has been disturbed to hide IEDs. They include:

• Desert Owl. — JIEDDO started deploying this ground-penetrating radar in 2009, according to the department’s annual report released in 2010. It is deployed on a piloted aircraft, Army records show.

• Copperhead. — This was developed at the same time as Desert Owl. Both systems “use unique radar for command wire detection, complemented by advanced image-processing algorithms,” according to congressional testimony in 2008 by Lt. Gen. Thomas Metz, who led JIEDDO at the time. It is deployed on an unmanned drone.

The United States’ technological edge appears to be overwhelming the Taliban’s blunt force, says John Pike, executive director of Globalsecurity.org, a defense policy organzation. Cameras and sensors have become cheaper and faster, and computing ability has increased to sort through the growing amounts of data collected, Pike says.

“Everywhere we turn, we’re producing sensors that are cheaper, faster, better,” Pike says. “The enemy’s stuck with that damn fertilizer bomb. It is an unequal contest. It is not a level playing field.”

Nearly 90 percent of the IEDs are fashioned from homemade explosives, according to JIEDDO. A 110-pound bag of calcium ammonium nitrate, a common fertilizer produced in Pakistan, can produce 82 pounds of explosives, enough to destroy an armored truck or 10 smaller bombs targeting troops on foot. An IED, detonated with a wire, punctured the hull of a Mine Resistant Ambush Protected (MRAP) truck on July 8, killing six soldiers.

Biometric data — fingerprints and retinal scans, for example — have been collected from a growing number of Afghans, including those joining security forces or applying for benefits or licenses, Carter said.

“What that means is that, if you have a checkpoint and you start stopping people randomly, it’s much easier to pick out the people who are malefactors,” Carter said. “We take latent fingerprints off of IEDs and later associate them with the guy who made them.”

Success hasn’t been cheap. JIEDDO has spent more than $18 billion to counter the threat.