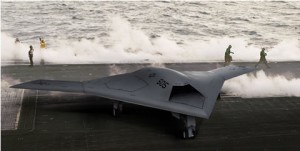 The Calvert County Commissioners were briefed by a U.S. Navy captain Tuesday, June 28 regarding the upcoming testing that will be done on an unmanned aircraft. While the tests will be over the Patuxent River and Chesapeake Bay and confined to an area adjacent to Patuxent Naval Air Station PAX NAS), Calvert residents might be concerned when they spot the tailless craft in the sky.

Engdahl said the “tailless, autonomous unmanned system” is under development by the Navy and Northrup Grumman.

The captain explained the craft, which was previously tested at Edwards Air Force Base (EAFB), is being moved to PAX NAS since the base has a catapult and an area suited to perfecting landings on aircraft carriers.

Engdahl said the tests at EAFB were conducted at higher altitudes. “We’ve made numerous discoveries in flight,” said Engdahl.

While the aircraft, which Engdahl said is equipped with a highly accurate navigational system, shows unmanned flight has great potential, it won’t put any pilots out of business.

“One of the nice things about this program is it doesn’t replace manned aviation,” he said.

Engdahl said residents of Solomons and the Drum Point subdivision are the Calvert residents who will get a view of the testing. The captain confirmed that no tests would be conducted at night.