UK and France May Sign Joint UAV Contracts in July 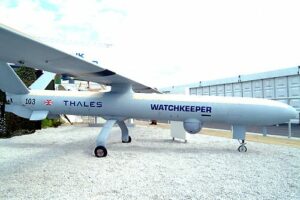 Dassault Aviation and BAE Systems are waiting for the British and French governments to decide whether to sign a 40 million euro technology development contract for their long-awaited Medium-Altitude, Long Endurance (MALE) drone, according to Eric Trappier, Dassault’s head of international affairs.

“We have submitted comprehensive and detailed offers to the two governments, and we are waiting for a response from DGA for the go-ahead for an 18-month preparatory phase,” Trappier told reporters June 12 at the Eurosatory show in this Paris suburb. “The two governments have worked on the issue, we have advanced the scope of the study, and now all we need is the contract signature.”

DGA, the French defence procurement agency, will act as the program’s executive agency on behalf of both governments, and each government will finance half of the project, or 20 million euros each. A separate contract, worth about 10 million euros, is also expected soon to fund exploratory studies of an Unmanned Combat Air Vehicle also planned by the two countries.

“The Anglo-French MALE UAV, if it is launched by governments, is an ideal vehicle to combine the know-how of the two national industries and optimize cooperative programs,” Trappier added.

Ha also said that, to date, there had been no word about the intentions of the new government of President François Hollande in the field of unmanned vehicles, which had been touted as a major Anglo-French cooperative project by the previous French government, but which had however not committed any funds to the program despite having reaffirmed its strong backing of the initiative as recently as mid-February. Joint development of a MALE UAV, and later of an Unmanned Combat Air Vehicle, is the most concrete weapons initiative of the 2010 Anglo-French defense cooperation treaty.
One point of the treaty – France’s promise to evaluate the British Army’s Watchkeeper drone for its own army – appears to have already fallen by the wayside, however, as Paris-based Sagem announced June 11 that the French army had instead ordered five additional Sperwer drones, as well as the upgrade of its in-service fleet. Although Sperwer is substantially smaller than Watchkeeper, it is unlikely the French army would have funds to buy another UAV given current financial straits and the withdrawal from Afghanistan,
On a national level, Dassault is also waiting for France to decide whether to buy an interim MALE drone, dubbed Voltigeur and derived from Israel Aerospace Industries’ Heron TP. This drone was intended for deployment in Afghanistan, but the requirement appears less urgent now that Hollande has decided to withdraw French troops from that country. It could still be used, however, as France’s contribution to NATO’s Alliance Ground Surveillance program, approved last month.

Incoming French Defense Minister Jean-Yves Le Drian has stated that his staff is working on the UAV issue, and that a decision would be forthcoming by Bastille Day, on July 14.

Both the defence ministry and Dassault have declined to comment about a Reuters report that the contract could be signed during the Farnborough Air Show next month. A Dassault official said that “it could be before, during of after Farnborough; we just don’t know.”