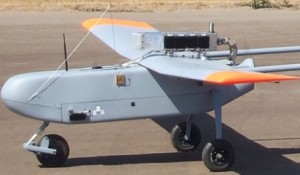 UAV with the EHTEG attached on top

A mid-size unmanned aerial vehicle (UAV) is powered with a one- or two-cylinder, two-stroke engine. Some of the engine’s mechanical output typically is used to drive an alternator to power onboard electronics. A small two-stroke engine converts the energy output of gasoline at an efficiency rate less than 20 percent on average.

A team of engineers at Electronic Cooling Solutions worked with John Langley and engineers at Ambient Micro to build an exhaust-heat thermoelectric generator (EHTEG) that can be incorporated into a UAV design to harvest and convert this waste energy into electrical power in flight. The engineers at Electronic Cooling Solutions did the initial EHTEG design, as well as analyzing and optimizing the thermal design. Then Langley’s team built, tested, and redesigned the generator based on the test results.
Energy in a small engine is wasted as the heat that is lost to cool the cylinder and cylinder head, loss from friction, and the heat of the exhaust stream. Using the heat from the cylinder and cylinder head is too complicated because it would interfere with the process of keeping the entire engine cooled during operation. Energy lost from friction is difficult to access, and it’s not a significant part of the overall energy loss anyway.

The best choice is the heat that is lost in the exhaust stream because it usually is about the same amount of power, or more, as the power delivered to the shaft, and it’s easy to get to.

The EHTEG had to be mechanically robust and integrate into the aircraft without compromising flight safety. It had to extract the required heat without impairing engine performance. It had to provide the largest possible temperature differential across the thermoelectric modules while operating within the maximum temperature limits of the thermoelectric modules. And it had to be designed with minimal weight and aerodynamic drag.

The full article with more images and video is available at: EETimes