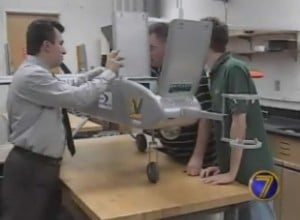 Clarkson University graduate student Jordan Janas has been part of a research team that has developed an unmanned aerial vehicle, or drone, that will be used to measure wind speeds and turbulence.

The data will then be able to be used by engineers to determine the best locations for potential wind energy projects primarily in offshore and coastal areas where winds often tend to be stronger.

“We give better data to the engineers designing the wind turbines,” said Janas.

The lightweight fiberglass drone, affectionately known by the research team as the Golden Eagle, is back on the Clarkson campus from its inaugural test flight in Indiana where it outperformed initial expectations.

The experimental 55-pound aircraft is being used as part of a $700,000 federal Department of Energy project that will study wind power resources on Lake Erie.

“We will know exactly the amount of power that can be generated and we’ll know where to located them,” said Clarkson University Professor Pier Marzocca.

It took five different versions and thousands of man hours before Clarkson researchers came up with the finished product.

Tiny sensors on the drone’s nose detect wind velocity and other data which is then stored and analyzed providing a low cost more accurate depiction of wind assessments.

Being on the cutting edge of wind energy development is an exciting opportunity for the Clarkson team.

“We can fly higher than they can place towers and we can fly lower than conventional aircraft,” said graduate student Daniel Valyou.

So keep an eye to the sky as the researchers also hope to be able to conduct more test flights in either Potsdam or Massena in the coming weeks.

Read the article and watch the news report video at: http://www.wwnytv.com/news/local/Clarkson-Develops-Drone-To-Help-Build-Wind-Turbines-157916925.html