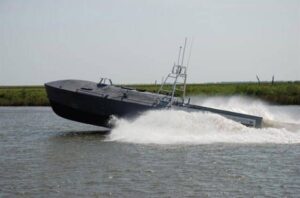 The Royal Canadian Navy is exploring options for unmanned ships, something Defence Minister Peter MacKay says could appear in the not-too-distant future.

The unmanned surface vehicles, or USVs, are the naval equivalent of unmanned aerial vehicles, the remote-control drones that are fast becoming the weapon choice for the Obama administration in the growing number of recent targeted killings of al-Qaida terrorists.

The technology for USVs is in its infancy compared with the aerial drones, but MacKay told The Canadian Press they could have a role to play in “near future” of the Canadian navy.

“We’re surrounded by water,” MacKay said. “Unmanned vessels, like unmanned aerial vehicles, give us reach and capability without the same risk. It allows you to keep harm at a distance. So there’s a lot of interest. . . . But it’s new technology.”

As part of a broader research and development initiative by the Atlantic Canada Opportunities Agency, MacKay recently announced a $3-million grant to Rolls Royce to help support research into USVs in his home province of Nova Scotia.

“In short, the project will develop technology for automatically conducting refuelling and launch-recovery missions at sea for unmanned surface vehicles,” said a May 23 ACOA statement announcing the initiative.

The commander of the navy says integrating USVs into the future fleet plan is already under consideration, particularly when it comes time to replace the current frigates late in the next decade.

“Any technologies, as they emerge, I’m keen to see how we can exploit them to make us better,” Vice-Admiral Paul Maddison said in a recent interview with The Canadian Press.

How the introduction of roboships would affect plans to replace the manned fleet, as laid out under the Conservative government’s much-hyped shipbuilding strategy, is unclear.

Over the last couple of years, navy coastal patrol ships have used underwater robots to hunt mines in conjunction with the American naval and coast guard exercises.

The devices plunge to the bottom of the ocean and scour for explosives.

“We certainly see it as a useful tool,” said Maddison.

But Maddison is excited that unmanned technology has a potential for growth “not only undersea but on the surface as well.”

The use of underwater robots tethered to a mother ship has been common for a couple of decades. But the expansion of pilotless aerial technology has allowed military planners to consider adapting it to surface ships.

The Israeli Navy currently leads the way in the use of naval drones.

But earlier this spring, U.S. defence contractor Textron Systems demonstrated a remotely operated patrol craft that could, in the company’s words, “keep the dull, dirty and dangerous jobs away from our personnel.”

Operated through a satellite link, the ships look like an armoured pleasure boat on steroids. They carry a suite of sensors and like their aerial cousins have the potential of providing real-time video feeds.

The U.S. Navy is considering how to adopt the technology, but has underlined that unmanned surface ships would not be armed, at least at first. Other navies, notably Singapore, have chosen to arm their small fleets in order to protect larger, manned vessels in closed-in waters such as the Persian Gulf.

Preservation of life is one aspect for all-volunteer fleets, such as Canada’s, which have recruiting troubles.

The navy has struggled to keep its ships crewed. Between 2006 and 2010, the fleet was at times short as many as 276 qualified sailors.

The ongoing struggle to fill billets is one of the reasons naval planners are considering the idea of crewing new Arctic Offshore Patrol Ships with reservists, just as they do with the existing coastal defence and minesweeping vessels.