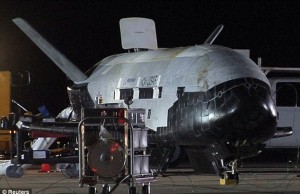 The unmanned space plane is the second of its kind to be sent up by the U.S. Air Force - but its purpose has never fully been explained

The experimental Boeing X37-B has been circling Earth at 17,000 miles per hour and was due to land in California in December. It is now expected  to land in mid to late June.

At launch, the space plane was accompanied by staff in biohazard suits, leading to speculation that there were radioactive components on board.